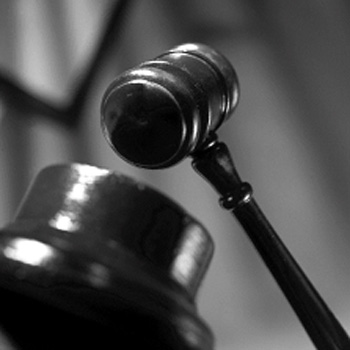 The Paull & Williamsons-sponsored event saw the two teams pit their wits against each in a fictitious legal appeal case in front of Sheriff Douglas Cusine, with the winning team deemed to be the best debaters.

Both Bruce and Nick received inscribed medals commemorating their success.

He said: There hadn't been an inter-university mooting competition set up in the city, as there is with sporting events, and so I sought to establish the Granite City Moot in the hope that it will become a permanent fixture in Aberdeen's legal calendar.

"This week's contest displayed the finest mooting talent the universities have to offer and it was fantastic to see the old Aberdeen-RGU rivalry reignited in such wonderful surroundings.  Bruce and Nick were worthy winners, but the event would not have been possible without strong support from the legal establishment in Aberdeen."

She said: "It was an excellent opportunity for the students to test their skills in a real courtroom setting, in front of a real Sheriff and local solicitors.

"No matter how skilled any student is in their understanding of the law, public speaking skills and confidence only come with practice and the moots are a great way to do that. The majority of law students will at one time or another have to work in a courtroom and these facilities allow students to prepare in the best way possible".