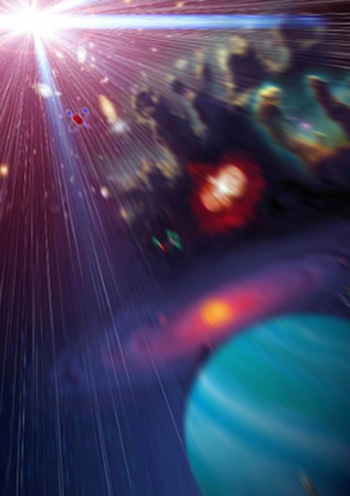 From the clues a space voyaging piece of rock from Orkney has told us about detecting life on other planets, to evidence of the largest meteorite ever to hit the British Isles – an audience will gain a unique insight into discoveries being made about space and evolution, at an event in the city on Wednesday (11 March).

Professor John Parnell from the University of Aberdeen's School of Geosciences will speak about his cutting edge geological research at Café Scientifique – a new series launched by the institution, providing a lively and informal public forum in Aberdeen for discussion of the latest topics in science and technology.

In his talk - entitled Rocks in Space - Professor Parnell will outline key geological findings from University research including the discovery of microscopic meteorites near Durness last year, which unveiled major clues about a catastrophic collision in the asteroid belt between Mars and Jupiter nearly 500 million years ago.

He will also describe the recent study which propelled a piece of Orkney rock into space attached to a Russian spacecraft, and provided experts with a greater insight into detecting life on other planets.

Professor Parnell's talk is just one of the events being hosted by the University as part of National Science and Engineering Week (6 – 15 March).

"Professor Parnell's fascinating research into evolution and space provides an enlightening and engaging topic for the third in the Café Scientfique series and is just one in a host of University events created to celebrate National Science and Engineering Week.

"Audience participation is key to the format and we are sure Professor Parnell's intriguing subject matter will provide an ideal prompt for lively discussion and debate."

Organised by the University's Public Engagement with Science team, Café Scientifique will be hosted one night per month until October in the Costa Coffee café of Waterstone's Union Bridge branch.

There is no need to book for the events which are free to attend and open to all.

The full Café Scientifique 2009 Winter/Spring programme can be found at http://www.cafescienceaberdeen.co.uk/ and is sponsored by the University of Aberdeen and a Science and Society grant from the Scottish Government.