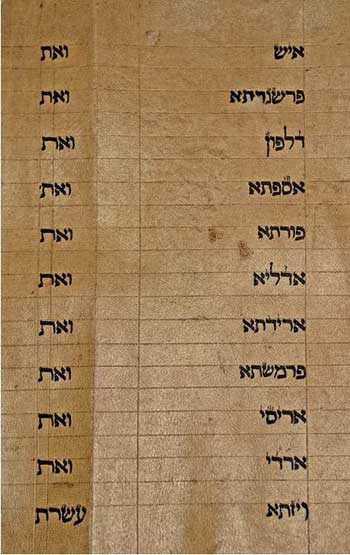 A priceless manuscript stored in the University of Aberdeen’s special collections will today (Tuesday, March 10) form the centrepiece of a colourful Jewish festival.

The Festival of Purim commemorates a time when the Jewish people living in Persia were saved from extermination – a story recounted in the Hebrew Bible's Book of Esther.

As part of the celebrations, members of Aberdeen's Jewish community and staff at the University will join Edinburgh Rabbi, David Rose, to hear the whole tale read from biblical scrolls believed to date back to the 15th century.

This is the fourth time the University has held the annual event, which is one of the most joyous holidays on the Jewish calendar.

Costumed children are encouraged to boo, hiss and stamp their feet – and generally make as much noise as possible – during the times in the service when Haman, the villain of the story, is mentioned.

"There is an active and vibrant Jewish community in Aberdeen, and across Scotland, and the Festival of Purim still has great meaning to members of the Hebrew community," explained Professor Chris Fynsk, Head of the School of Language and Literature at the University.

"The story of Purim is told in the Biblical book of Esther in which we are commanded to eat, drink and be merry. It is also a tradition to send out gifts of food or drink, and to make gifts for charity.

"It is a real family festival and we encourage people, especially the younger people, to get dressed up and bring along their own noisemakers. Rabbi Rose gave a warmly remembered performance when we first held the event in 2006 and we are delighted to have him back in Aberdeen."

The University safeguards a quarter of a million rare books and manuscripts, including a rich collection of over 1,000 items related to Jewish religion and history. The collection also includes the two scrolls of text from the Book of Esther.

Tuesday's event is co-sponsored by the Aberdeen Hebrew Congregation and made possible with the generous assistance of the University's Special Collections team. It will take place at 3:30pm in Room 614 of the MacRobert Building.

The story of Purim is told in the Biblical Book of Esther. The heroes of the story are Esther, a young Jewish woman living in Persia, and her cousin Mordecai, who raised her as his daughter. Esther was taken to join the harem of the Persian King Ahasuerus, who loved her so much that he made her queen. But the king did not know that Esther was a Jew, as Mordecai had told her not to reveal her identity.

The villain of the story is Haman, the king's arrogant and egotistical advisor, who hated Mordecai and tried to turn the king against the Jews. The king gave the fate of the Jewish people to Haman to do as he pleased, and Haman planned to exterminate them all.

Mordecai persuaded Esther to speak to the king on behalf of the Jewish people. This was risky, as people who entered the king's presence unsummoned could be put to death. Esther asked all the Jews to join her in fasting for three days before she went to the king. He welcomed her, and she told him of Haman's plot against her people. The Jewish people were saved, and Haman was hanged on the gallows that had been prepared for Mordecai. Purim is celebrated on the 14th day of Adar, which is usually in March. The 13th day of Adar is the day that Haman chose for the extermination of the Jews, and the following day, the 14th, they celebrated their survival.