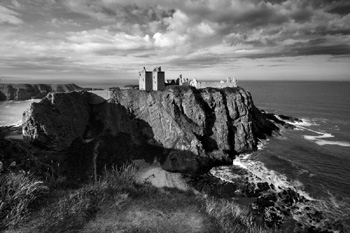 The winners of a photography competition, challenging entrants to capture striking images of archaeological sites and monuments in Aberdeenshire, have been announced.

Devised by archaeologists at the University of Aberdeen, the Picturing the Past competition drew entries from budding and professional photographers of all ages under the three competition categories: adult monochrome images, adult colour images and children's images (for those under 16).

The winners were selected from 30 finalists on the basis of public votes cast through an online picture gallery, as well as the votes of the judges, who included staff from the University of Aberdeen's Archaeology Department, Marischal Museum, Aberdeenshire Council, and the professional landscape photographer, Sandy Menzies.

The online exhibition - which can still be viewed at http://www.abdn.ac.uk/archaeology/photocompetition/gallery/ - received over 25,700 hits during the competition.

A total of 1816 votes were cast, over 800 of which were cast in the children's category.

The judges made their decisions based on the composition, technical quality and creativity of the photographs, and the extent to which the photographs captured the historical essence of the sites.

The overall first place award, and the coveted £1000 cash prize, went to John Parminter, of Millom, Cumbria, for his black and white photograph of Dunnottar Castle.

Tom Gray of Edinburgh, an experienced photographer of 84, garnered the £100 first prize in the adult monochrome category for his photograph of Aquhorthies recumbent stone circle.

The £100 first place prize for a colour photograph by an adult went to David Porter, from Turriff, for his photo 'Standing Proud', which captured Easter Aquhorthies recumbent stone circle.

Nigel Corby, of Banchory, won an honourable mention for his black and white photograph of the restored recumbent stone circle at Tomnaverie and its surrounding landscape.

Three prizes were awarded in the children's category. The top prize of £50 went to 15-year-old Ashleigh Armstrong for her black and white photograph of Dunnottar Castle. The £25 second prize was awarded to Lauren Harper, 7, for 'Picture Window of Huntly Castle'. Erin Taylor Sharp, also 7, won £10 for her photograph of the shell midden at the Sands of Forvie, near Newburgh.

The cash prizes were funded by a Cultural Engagement Grant from the University.

Dr. Karen Milek from the University of Aberdeen's Department of Archaeology said: "We found it a challenge to select 30 finalists from the 160 submissions to the competition, but it was even more difficult to select the final winners. The quality of all the photographs in the last stages of the competition was extremely high – many were of professional quality. The public vote was split as well.

"We are delighted with the public response to the photography competition. Many of the finalists have told me that the competition impelled them to visit archaeological sites in northeast Scotland that they had never seen before. One finalist has even made it her project to visit and photograph all of the recumbent stone circles in Aberdeenshire!

"Since thousands of people have viewed the online exhibition, may of whom may be children or people who could not otherwise visit the sites in person, the competition has reached a much wider audience than we ever thought would be possible. I hope that everyone who participated feels that they learned something more about the deep history of northeast Scotland."

The Picturing the Past exhibition, which displays the 30 finalists' photographs alongside prehistoric and medieval artefacts from Aberdeenshire, can be seen at the Old Town House, on the University of Aberdeen's King's College Campus, until March 16, 2009. It is open Monday to Saturday, 9am – 5pm.