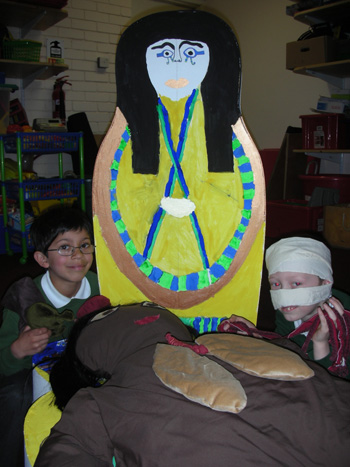 The unusual workshop was run by Alison Parfitt, Marischal Museum's Education and Access Officer, who will contribute to a host of events at the upcoming Marathon Schools' and Children's Festival (May 12-17) – part of this year's Word Festival.

Primary Three Cults pupils learnt how the Ancient Egyptians used canopic jars to store and preserve their internal organs for the afterlife.

In the meantime, secondary school youngsters are being encouraged to get scribbling for this year's What's the Story? competition, the winner of which will be announced during the Word Festival weekend.

The popular contest – open to all senior school pupils in Aberdeen and the Shire – is the result of a successful ongoing partnership between Word and the Aberdeen Storytelling and Theatre Festival.

This year's budding North-east wordsmiths will be asked to submit an entry based on the theme of 'On Display'.

Annette Murray, Aberdeen City Council Arts Education Co-ordinator, explained: "The competition gives secondary pupils an opportunity to be imaginative as possible. They are free to explore the idea in any direction they choose, so 'On Display' could, for instance, suggest the idea of having no hiding place, wearing your heart on your sleeve or a mummy in a museum.

"As 2009 is the year of Homecoming our theme was also inspired in part by the idea of Scotland showcasing itself to the wider world, with its great contributions from golf and genealogy to innovation and, of course, literature.

"We had some wonderful submissions last year and we are now eager to see as many secondary pupils as possible put their imaginations into gear and get writing."

What's the Story prizes will be donated by Waterstones and the winners and their families will be invited to attend a special award ceremony at Word, which will feature a creative writing workshop with author James Jauncey.

The Perthshire-based writer has since had a string of successful children's adventure novels published, including his most recent book, The Reckoning, a murder mystery set in a remote island community.

The winning What's the Story tales will be collected and published by Wordfirsts – the only publisher in Scotland dedicated to publishing the work of young people. Some of the winners will also have their work published in The TESS (Times Educational Supplement Scotland).

Entries for the competition are welcomed from all secondary school students in Aberdeen City and Aberdeenshire schools. S1-S3 entries should be a maximum of 1000 words and S4-S6 entries no more than 1200 words.

Stories should be loosely based on the theme of 'On Display' and should be typed on one side of paper only and double-spaced. Each page should be numbered with the title of the story at the top.