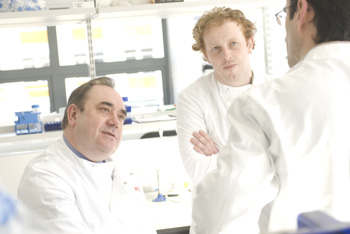 PTL is focusing on the discovery and development of the next generation of biopharmaceutical therapies, which may lead to the development of novel protein treatments for neuroscience, oncology, inflammation and metabolic diseases.

Alex Salmond, First Minister of Scotland, presided over the opening.

The First Minister said: "Life sciences is one of Scotland's key industries, employing more than 30,000 people and contributing £3 billion to our economy. And it is growing – 15 per cent faster than the average European growth rate.

"The presence in Scotland of Wyeth, one of the largest research-driven biopharmaceutical companies in the world, is testament to the skills, expertise and growth potential we offer."

He added, "Wyeth's innovative research and technology, such as using the protein from sharks, is investigating potential new therapies for illnesses such as cancer, Alzheimer's disease and rheumatoid arthritis."

PTL will build upon the work of Haptogen Ltd., a biotech company based in Aberdeen, that Wyeth acquired in October 2007.

"Scotland's excellence in the life sciences industry is recognised around the world," said Menelas Pangalos, Ph.D., Executive Vice President of Discovery, Wyeth Research, who was in Aberdeen for the opening.

"We believe strongly in the importance of having a broad range of biotherapeutic platform technologies for the successful progression of our drug discovery programs. The research being conducted at this facility has the potential to pave the way for a new generation of protein therapeutics that address significant unmet medical needs and offer new promise for patients."

Wyeth's relationship with Scotland extends beyond PTL. The Company is working with the Universities of Aberdeen, Dundee, Edinburgh and Glasgow, regional National Health Service boards and Scottish Enterprise as part of the Translational Medicine Research Collaboration and with the University of Strathclyde on a collaboration in the field of medicinal chemistry.

Jack Perry, Chief Executive of Scottish Enterprise which has worked closely with Wyeth to help develop its operations in Scotland, said: "The opening of the Protein Therapeutics Laboratory further enhances Scotland's already remarkable reputation as the centre of excellence in life sciences. It also provides new momentum for Scotland to lead the way in the development of personalised medicine, bringing new treatments to patients suffering from a range of serious illnesses.

"Wyeth has been an outstanding partner for Scotland in the Translational Medicine Research Collaboration which itself is a great illustration of Scotland's capability in conducting world leading research.

"Both Wyeth and the Scottish economy – and ultimately Scottish patients – will benefit from the collaboration as it continues to evolve as one of Europe's most creative and best connected life sciences communities.

"The opening of this centre represents a major economic investment in the North East and boosts Aberdeen's growing reputation as one of Scotland's major hubs for life sciences expertise."

Wyeth is one of the world's largest research-driven pharmaceutical and health care products companies. It is a leader in the discovery, development, manufacturing and marketing of pharmaceuticals, vaccines, biotechnology products, nutritionals and non-prescription medicines that improve the quality of life for people worldwide. The Company's major divisions include Wyeth Pharmaceuticals, Wyeth Consumer Healthcare and Fort Dodge Animal Health.

The statements in this press release that are not historical facts are forward-looking statements that are subject to risks and uncertainties that could cause actual results to differ materially from those expressed or implied by such statements.  Other risks and uncertainties that could cause actual results to differ materially from those expressed or implied by forward-looking statements include, among others, risks related to our proposed merger with Pfizer, including satisfaction of the conditions of the proposed merger on the proposed timeframe or at all, contractual restrictions on the conduct of our business included in the merger agreement, and the potential for loss of key personnel, disruption in key business activities or any impact on our relationships with third parties as a result of the announcement of the proposed merger; the inherent uncertainty of the timing and success of, and expense associated with, research, development, regulatory approval and commercialization of our products and pipeline products; government cost-containment initiatives; restrictions on third-party payments for our products; substantial competition in our industry, including from branded and generic products; emerging data on our products and pipeline products; the importance of strong performance from our principal products and our anticipated new product introductions; the highly regulated nature of our business; product liability, intellectual property and other litigation risks and environmental liabilities; the outcome of government investigations; uncertainty regarding our intellectual property rights and those of others; difficulties associated with, and regulatory compliance with respect to, manufacturing of our products; risks associated with our strategic relationships; global economic conditions including interest and currency exchange rate fluctuations and volatility in the credit and financial markets; changes in generally accepted accounting principles; trade buying patterns; the impact of legislation and regulatory compliance; risks and uncertainties associated with global operations and sales and other risks and uncertainties, including those detailed from time to time in our periodic reports filed with the Securities and Exchange Commission including our current reports on Form 8-K, quarterly reports on Form 10-Q and annual report on Form 10-K particularly the discussion under the caption "Item 1A, Risk Factors" in our Annual Report on Form 10-K for the year ended December 31, 2008, which was filed with the Securities and Exchange Commission on February 27, 2009. The forward-looking statements in this press release are qualified by these risk factors. We assume no obligation to publicly update any forward looking statements, whether as a result of new information, future developments or otherwise.