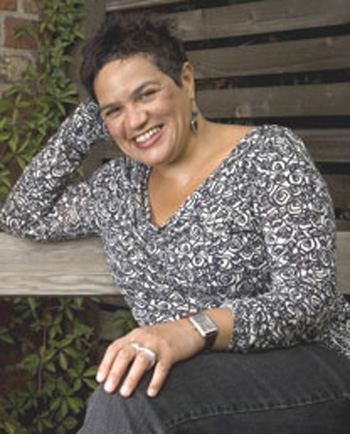 Pupils at Portlethen Academy will hold the school's second annual 'Threads in the Tartan' festival, which is sponsored by the University's Research Institute of Irish and Scottish Studies (RIISS).

Jackie, who was born to a Scottish mother and Nigerian father, was adopted by a white family shortly after her birth and was brought up in Glasgow. Her work mainly deals with issues of cultural identity.

The Portlethen pupils have been exploring racism, discrimination, prejudice and stereotypes through discussion work and case studies of people such as Martin Luther King.

The festival culminates in a number of school assemblies for all students that will promote positive messages about diversity. This will include premiering short films, produced by pupils, with anti-racist themes.

Jackie Kay will be the school's guest keynote speaker on the day, and will also be leading a workshop for the Advanced Higher English students.

RIISS's involvement carries on from the work with schools it initiated with last year's Word Festival Continuous Professional Development (CPD) conference for teachers, which featured a number of prominent authors.

Councillor Richard Stroud, chairman of Aberdeenshire Council's Education, Learning and Leisure Committee, said: "The festival provides an opportunity for all pupils to share in a positive, cultural experience which celebrates Scotland and poetry and also provides a platform for messages which rise to the challenge of racism and prejudice.

"The event also helps to promote and support the development of the four capacities of 'A Curriculum for Excellence'. Pupils develop confidence in engaging with these issues, are encouraged to communicate their ideas through poetry and film and have the opportunity to contribute towards promoting social inclusion for everyone."

Professor Martyn Rouse, Director of the Inclusive Practice Project at the University of Aberdeen said: "Students and staff of Porthlethen Academy have created a most valuable resource for young people, teachers, and for all of us who work to help schools to be more responsive to diversity. I look forward to using the DVD with students in the University."