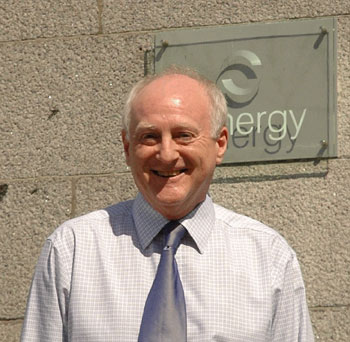 Technology which could drastically reduce carbon dioxide (CO2) emissions across the globe will come under the spotlight at a lecture in Aberdeen this week (Thursday 2 April).

David S Hughes, Carbon Storage Specialist at Senergy Alternative Energy, in Aberdeen, will give an overview of how carbon capture and storage (CCS) could help radically reduce emissions of the greenhouse gas which is cited as a cause of global warming.

Mr Hughes will explain the capture technologies currently available and being developed, transportation options and subsurface storage techniques in his lecture Carbon Storage and Capture, which takes place at the King's College Conference Centre at the University of Aberdeen at 6pm.

His lecture is part of the University's Energy Controversies series which brings together leading global energy experts to discuss and debate the current and future challenges facing the sector.

Mr Hughes said: "After energy efficiency and savings, capturing carbon dioxide at point sources such as coal fired power stations, and piping and storing it in geological formations, is seen as the technology that can make the biggest contribution to reducing manmade CO2 emissions worldwide.

"But there are practical implications to be considered when you look at the scale on which CCS would be required to operate.  For example Longannet, Scotland's largest generating station located in Fife, emits 10 million tonnes of CO2 each year.  Capturing and storing these emissions over a 40 year period would require around 4 billion barrels of subsurface storage capacity, which is equivalent in size to the largest North Sea oil fields such as Forties and Brent."

"My lecture will look at a range of factors to be considered around CCS from the technology it requires through to its risks, safety and economics."

Aimed at influencing energy and social policy at a local and national level, the Energy Controversies series features seven public lectures and a discussion panel event.

Highly topical issues to be covered over the course of the series include:

The remaining lecturers who will present in the series are: Professor Bahman Tohidi, Director of the Centre for Gas Hydrate Research at Heriot Watt University; and Dr David Galbreath, Senior Lecturer in Politics and International Relations at the University of Aberdeen.

Professor of Soils & Global Change at the University of Aberdeen and author for the Intergovernmental Panel on Climate Change (IPCC), Pete Smith was due to give a lecture entitled Global Warming: the View of the IPCC as part of the series in February.  This lecture was cancelled due to adverse weather conditions but has been rescheduled and will now take place on Thursday 23 April, at the University's King's College Conference Centre at 6pm.

Anyone interested in booking a free place for Professor Smith's lecture or any of the  other remaining lectures in the series should visit www.abdn.ac.uk/energycontroversies or telephone the University of Aberdeen Events Office on 01224 273874.