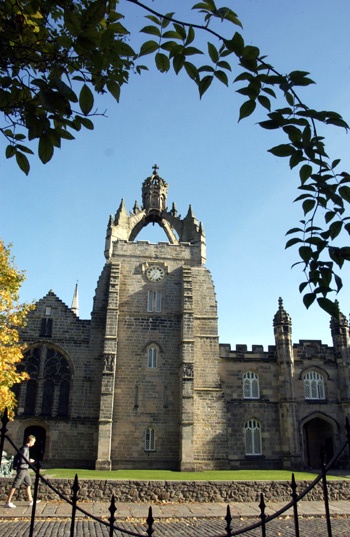 The University of Aberdeen has launched a £15 million recruitment campaign to bring even more internationally renowned professors and senior scholars to the institution.

The initiative is an integral part of the University's ongoing drive to become one of the world's top 100 universities.

Under the leadership of Principal Professor C Duncan Rice, the University has undergone a period of comprehensive transformation, focussed directly or indirectly on creating an intellectual community of world distinction.

In the last decade the institution's turnover has more than doubled to over £200M and student numbers have increased from 9,000 to 15,522 with over 4,000 from outwith the UK.

Research income has trebled over the last 10 years.  Yesterday (Thursday) Scotland's funding body, the SFC, announced it has substantially increased Aberdeen's research grant from just over £15 million to more than £19 million, which is a rise of 27%, by far the highest given to any Scottish research intensive university.

Now the University is launching a second phase of its major academic recruitment campaign, the Sixth Century Chairs Programme. In the first phase, the University spent more than £9 million and attracted more than 70 internationally distinguished professors and many more talented academics at earlier stages of their career.

Professor Rice said: "The University of Aberdeen has had some remarkable achievements in recent years but we have a long way to go to reach our goal of being one of the top handful of universities in the world.

"That's why the University of Aberdeen is spending a further £15 million over the next three years to bring more of the world's more exciting scholars to Aberdeen.

"Universities can be countercyclical in times of economic downturn and there are opportunities to attract important scholars and the people we want from all over the world.  Our splendid financial health means we can announce this spending programme, while other universities may be looking at making job cuts.

"We are interested in brain power, and are willing to talk to remarkable individuals who have achieved international distinction in their field, irrespective of disciplines.

"We regard this as an important next step towards becoming, in global terms, one of the handful of truly outstanding universities."