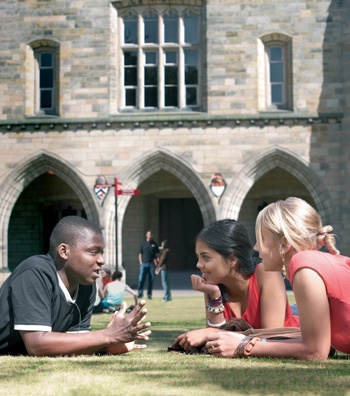 The innovative ways in which the University of Aberdeen communicates with students has earned the institution a hat-trick of prestigious award nominations.

The University's Student Recruitment and Admissions Service has been shortlisted as a finalist in three categories of the Higher Education Information Services Trust (HEIST) Awards, which celebrate excellence in education marketing.

The University is contending against other leading UK higher education institutions in the categories of Best Higher Education Prospectus, Integrated National Campaign and Digital Media.

The institution secured its place as a finalist in the category of Best Higher Education Prospectus for its 2009 undergraduate prospectus.   Feedback from focus groups in secondary schools throughout the UK was incorporated in the prospectus, which reflects both the traditional aspects of the historical University and its contemporary outlook.

In the Integrated National Campaign category, the institution has been recognised for the unique tools used to communicate with prospective students and applicants.  This included the introduction of a scheme enabling new students to enjoy the benefits of their prospective academic life – such as sports, library and computing facilities - three months early.

The creation of a bespoke online game which engaged prospective students and developed their knowledge of the University in an entertaining way, has earned the institution a finalist place in the Digital Media category.

Rachel Sandison, Head of Student Recruitment and Admissions at the University of Aberdeen said: "From online communications such as e-zines, viral games and social networking sites, through to our revamped prospectus which has been developed taking into account the opinions of prospective students, the University of Aberdeen uses a wide range of tools to speak with those considering furthering their education at the institution.

"Receiving these three nominations for the HEIST awards, which are acknowledged as some of the most esteemed accolades in higher education, is recognition of the innovative and creative ways in which the University is engaging with students."

The winners of the HEIST awards will be announced at an Awards Gala Dinner held at the Royal Courts of Justice in London on 7 May, hosted by journalist, TV and radio presenter Jeremy Vine.