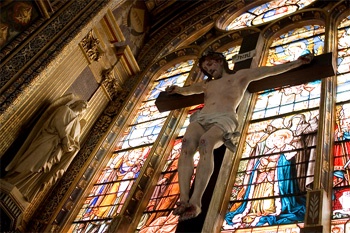 Religion can help peace processes, reconcile hostile communities and bring about democracy, according to new research.

The paper, 'Religion and peace processes: a conceptualization', challenges the common view that religion is an obstacle to peace between divided communities, or a cause of the problem.

"If not portrayed as a benign irrelevance, religion is depicted as a malign force," says the paper, written by the University of Aberdeen's Professor John Brewer and Dr Francis Teeney, and Dr Gareth Higgins of Duke University.

They say that some social scientists believe that religion "provokes governments, ethno-religious groups and various warlords to believe God is on their side in war." Examples where churches have not helped include the Dutch Reform Church, which supported apartheid in South Africa.

But the paper gives a 'less well documented' list of occasions when religion has helped to solve conflicts. This includes Poland, where the Catholic Church supported the end of communism; the support for human rights in Guatemala, El Salvador and Nicaragua by the Catholic Church; and the working together of Catholic and Protestant churches in Sierra Leone.

The authors identify the ways in which religious groups are most helpful. One is by producing new ideas on how to solve conflict in society. Another is by acting as inspirational role models by putting into practice within their own organisations their ideals of being non-racists and non-sectarian.

"The churches' role in peace processes helps garner, in individuals and groups, the virtues of trust, tolerance and community," says the study.

"Some of them think about what for many others (including some other churches) is still unthinkable – non-racialism, non-sectarianism, the ending of repression, political and socio-economic reform, the fall of communism and the like.

"Churches are more effective in doing this when they are part of a general coalition of civil society groups that envision the future, much as in South Africa, where Anglican and Catholic churches were part of a general anti-apartheid alliance, but they occasionally either lead the opposition, such as in Burma, or co-ordinate it, as in Poland."

Sometimes it is unorthodox religious groups, working outside the established conservative church hierarchies, which come up with new ideas for solving problems. One example is in Nicaragua, where local Catholic churches were more sympathetic to revolutionary parties than was the Catholic hierarchy.

In Northern Ireland, the ecumenical churches developed ideas about non-sectarianism and inter-faith dialogue that drew the divided country together in advance of formal political talks, which the churches did not take part in.

The paper argues that religious organisations are more effective when they are seen as neutral or are outside dominant majority religions, one example being the Methodist Church, which was active in peace work in Northern Ireland.

"Minority status can place them outside the mainstream, leading to feelings of strangeness from the majority and to empathy with other minorities, or of being in a similar position to the victims of communal violence.

"It can lead to feelings of marginality and thus to extra efforts to make a difference in the peace process in compensation for what is otherwise a low profile or even relative neglect."

The paper addds that religion on its own cannot solve civil conflict. "On its own, religion achieves less. We dispute that religion alone is capable of delivering peace."

The research was funded by the Economic and Social Research Council.