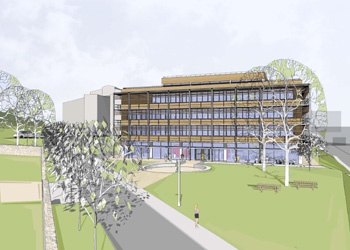 After 3 years of fundraising, the appeal to raise funds for the new Suttie Centre for Teaching and Learning in Healthcare – the centre being built by the Matthew Hay Project - is drawing to a close.

This exceptional sum will create a state-of the-art healthcare and medical education centre on the Foresterhill site.

If you would like to make a donation but haven't yet done so, the appeal will run until the end of April.

Already almost 830 people have given over 1,500 donations, which has helped to raise nearly £6m – almost £1.5m more than the original target.

Gifts have ranged from £1 upwards and have been received from graduates, companies, charitable trusts and foundations. Many have chosen to support a seat in the lecture theatre, with a suggested gift of £1,000.

All funds raised will be used to ensure that the building is equipped to the highest of standards for the benefit of medical students who are beginning their career in medicine and for healthcare staff who are seeking to continue their professional development.

Everyone who has given to the appeal will be thanked by being acknowledged in the new building. Plans are underway with an Edinburgh based artist to develop an innovative way of doing this.

The cut off date for including names in the new centre is 30th April.

To give, you can either do this online by visiting https://www.abdnalumni.org/NetCommunity/SSLPage.aspx?pid=438&srcid=438 and choosing The Matthew Hay Project. Alternatively you can contact Vicki Corbett on 01224 274111 or email v.corbett@abdn.ac.uk.

The Suttie Centre for Teaching and Learning in Healthcare is due for completion in May and will open in September.