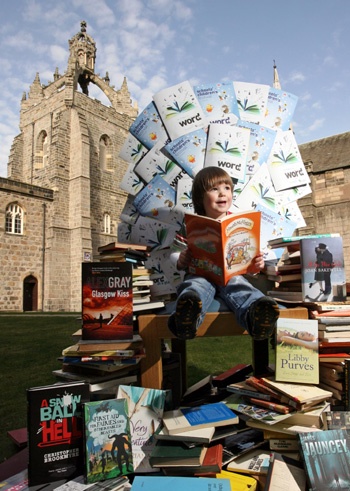 Record numbers of tickets have been snapped up ahead of Word 09 – the University of Aberdeen's Writers Festival.

Almost 4,500 passes for the literary festival have been bought within just a few weeks of the box office opening to the public – three times as many as this time last year.

A number of events have now sold-out completely, including appearances by Sixties icon and broadcaster, Joan Bakewell and Scottish crime writer Christopher Brookmyre.

Others close to capacity are audiences with Rebus-creator Ian Rankin, BBC Security Correspondent Frank Gardner, and John Boyne – author of the Holocaust drama The Boy in the Striped Pyjamas.

Demand has also been high for the ever-popular Word Schools' and Children's Festival (May 12-17) which has nearly completely sold-out with three weeks to go until the first event.

This year's Word is twice as big as 2008. Over 60 authors and 130 events will feature at King's College campus and at arts venues throughout the city during the weekend of May 15-17.

An expected 11,000 visitors will be treated to a mix of poetry and prose, theatre, music, lectures, film screenings, workshops and exhibitions.

Carley Williams, Word Festival co-ordinator, said: "Word has really expanded this year and the high number of ticket sales reflects the breadth and sheer number of events we're putting on.

"We've been thrilled with the appetite shown for the programme so far and things are shaping up for another wonderful weekend.

"However, there's always a flip-side, and tickets are now beginning to disappear for many of the most popular authors so we would strongly urge anyone who is thinking about attending Word to book now in order to avoid disappointment closer to the festival."

The full programme is on the Word website www.abdn.ac.uk/word

Alan Spence, award-winning writer, Artistic Director of Word and Professor in Creative Writing at the University of Aberdeen is available for interview

Selected writers will be available for interview in advance of the Festival. For further details contact Patrick McFall on 01224 272013 or email p.mcfall@abdn.ac.uk

Selected photographs of writers, logos and launch visuals are also available on request