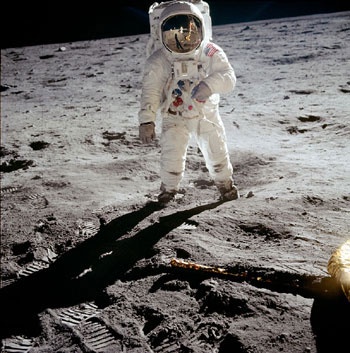 A leading science writer and broadcaster will provide a unique insight into the mission to place the first man on the Moon, at a free event at the University of Aberdeen next week.

Dr Chris Riley – who has directed and produced over eighty programmes for the BBC, including Tomorrow's World - will give a talk detailing the background to the Apollo 11 mission which saw US astronaut Neil Armstrong take the famous first steps onto the Moon's surface.

David Woods, editor of the NASA Apollo Flight Journal and author of Apollo - How we flew to the Moon and Frank O'Brien, a leading expert on the Apollo computer and guidance systems and the Lunar Module, will also take part in the event which has been created to coincide with the 40th anniversary of the historic mission which took place on 20 July 1969.

In his talk entitled Engineering Apollo – Stories of the 400,000, Dr Riley will provide an insight into his work documenting and analysing the momentous flight of Apollo 11 and the other eight manned flights to the Moon undertaken by NASA.

Dr Riley's 2007 film documentary, In the Shadow of the Moon, which chronicles the stories of many of the astronauts who flew to the Moon between 1968 and 1972, and his spin off series for the Discovery Science Channel Moon Machines - which tells the stories of the 400,000 engineers who made the dream of Apollo a reality - will form the basis of his talk.

In the Shadow of the Moon won the World Cinema Audience Award at the 2007 Sundance Film Festival, and Moon Machines won a Grand Remi this year at the Houston International Film Festival.

Following his talk Dr Riley will be joined on stage by both Woods and O'Brien, when there will be an opportunity for questions from the audience.

Entry to Dr Riley's talk is free but advance registration is advised.  To register, or for further information visit http://www.abdn.ac.uk/science/apollo/ or contact 01224 273874.