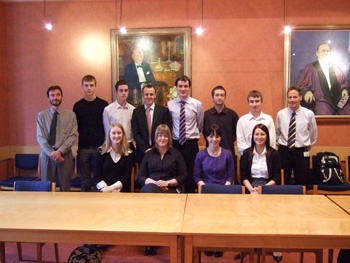 CNR International (UK) Limited has announced the launch of eight new undergraduate scholarships in the College of Physical Sciences and the College of Arts and Social Science at the University of Aberdeen.

The scholarships have been set up in memory of four former employees of CNR, who have passed away in recent years, and will provide support to the scholars selected for the duration of their degree courses.

The scholars participating in the scheme are studying in the areas that the four former employees of the company were engaged in, namely Petroleum Geology, Petroleum Engineering, Accounting & Finance and Engineering.

Commenting on the launch of the initiative, CNR's Vice President, Finance Barry Duncan said: "CNR is extremely pleased to be launching this programme with the University of Aberdeen. It is well recognised that our industry, both globally and here in the North Sea, has a long future ahead of it, but the potential we see in the future will only be realised if we can attract talented professionals into the industry.

"As an industry, we need to continue working hard to encourage as many young people as possible to consider a future in oil and gas. We believe the CNR scheme is a fantastic way of achieving this goal.

"In addition, we are very proud that the scholarships are carrying the names of four former colleagues and friends who are no longer with us, but who all contributed significantly to the success of CNR in the North Sea and in West Africa before their premature deaths. It is fitting that we are able to remember them by way of this tribute, and would like to thank their families for their support in setting these scholarships up."

Professor Albert Rodger, Vice-Principal and Head of the College of Physical Sciences, University of Aberdeen welcomed the announcement and said: "Working with leading international companies such as CNR  to develop scholarship opportunities for our students is a key objective for the University of Aberdeen and we are delighted to add these very valuable new scholarships to our portfolio."

For Tom Packham, one of the students who will benefit from a scholarship, the support is valuable to him not only from a financial perspective, but also through the opportunity of receiving mentoring and work placement experience, which also form part of the programme.

Tom, who is in his first year of studying for a degree in Accountancy and Finance at the University said: "The scholarship from CNR is a massive boost to my academic career.  It not only provides important financial support, but also the opportunity to gain real life work experience and mentoring which will enhance my course work, and benefit me in my future career."

With current daily production before royalties in excess of 560,000 barrels of oil equivalent per day, Canadian Natural is one of the largest independent crude oil and natural gas production companies in the world, focused on ongoing operations in its core areas located in Western Canada, the U.K. portion of the North Sea and offshore West Africa.

In the North Sea, CNRI operates 99% of its production and has an average working interest of 80%.  Its operations are focused around four hubs, Ninian, Murchison, Banff and T-Block, which provide a strong basis for future exploitation and near-pool exploration. For more information, visit www.cnrl.com.