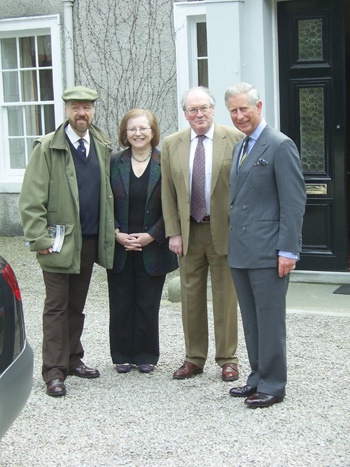 On Saturday morning 25 April 2009, HRH The Duke of Rothesay made a surprise private visit to Old Aberdeen.

During the course of the morning, Prince Charles, who was accompanied by Marc Ellington of Towie Barclay Castle, chatted with students and visited a number of Old Aberdeen's foremost historic sites including King's College Chapel, St Machar's Cathedral and The Old Town House, where they inspected recent restoration work carried out by the University.

At King's College Chapel, Mr Ellington introduced The Prince to Professors Peter Davidson and Jane Stevenson, authors of the recently published book, The Lost City, which examines the history and evolution of Old Aberdeen.

On arrival at St Machar's Cathedral, Dr Alan Falconer, the Minister of St Machar's, pointed out a number of the building's important historic features, including its magnificent 16th century heraldic ceiling, which is unique in Scotland.

Before departing, Prince Charles and Mr Ellington were given a cup of tea at Chanonry Lodge by the Principal of the University of Aberdeen, Professor C Duncan Rice and his wife Susan.