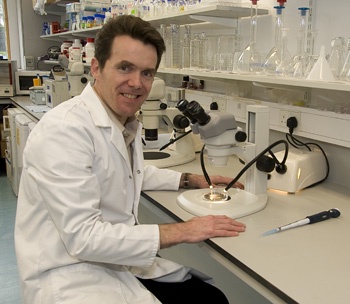 Scientists have uncovered how and why limbs are targeted by thalidomide - the drug that caused serious defects in babies whose mothers had taken it to relieve their morning sickness.

The University of Aberdeen led team has revealed that a component of the drug prevents the growth of new blood vessels in the developing embryo.

Their discovery also explains, for the first time, why the drug only causes birth defects during a short timeframe in the developing embryo.

Their findings have prompted the researchers to suggest that perhaps the drug - still used today to treat leprosy, cancer of the bone marrow (multiple myeloma), and as an anti-tumour agent - could be re-developed for some treatments, so it does not contain the element that causes defects.

Dr Neil Vargesson, Lead researcher and Lecturer in Developmental Biology at the University of Aberdeen, said: "We have put to rest a 50 year puzzle, in finally deducing how thalidomide triggers limb defects and why it appears to target limbs preferentially."

Thalidomide was available to pregnant women in the late 1950s but it was taken off the UK market in 1961 after a link was made between the drug and the numbers of babies born with severe deformities.

The most common defect was to the limbs. Babies were born with stunted arms or legs or, in some cases, no limbs at all.  It is estimated that around 10,000 babies around the world were damaged by thalidomide.

Now in a paper published today in Proceedings of the National Academy of Sciences the research team have not only demonstrated which activity of the drug causes the limb defects, but also how limb defects then arise.

Thalidomide has several known active components. Following break down of the drug, the team discovered that only one of the active elements causes the abnormalities.

The element responsible has "antiangiogenic" properties which means it inhibits the growth of new blood vessels which, following thalidomide exposure early in development, results in the deformities.

Dr Vargesson, who collaborated on the research with American organisations, SAIC-Frederik and the National Cancer Institute (NIH), explained: "Thalidomide is a complicated drug with many actions, but which of these cause limb defects and, as importantly, how this action causes defects, has eluded researchers for many years.

"Many theories have been put forward but this is the first paper to conclusively show that it is the antiangiogenic property of the drug – that element that inhibits new blood vessel formation – that is to blame for the defects.

"The drug was taken by mothers-to-be early in their pregnancy, to combat morning sickness,   typically around five to nine weeks, although morning sickness in some women can last a lot longer.

"But this specific timeframe is crucial as that is when the limbs of babies are still forming.

The blood vessels involved in this process, at this stage of pregnancy, are still at an immature stage when they rapidly change and expand to accommodate the outgrowing limb.

"But the antiangiogenic activity of the drug stops the growth of these blood vessels and that results in limb defects.

"At this time of the pregnancy the rest of the embryo is unharmed because the blood vessels elsewhere are stable and mature."

Dr Vargesson, who is based at the University's Institute of Medical Sciences, added: "How thalidomide causes limb defects has been a question society has been asking ever since the first cases of thalidomide embryopathy were described between 1958 and 1961.

"This has become more urgent since the drug is now used around the world to treat leprosy and multiple myeloma, due to the drug's anti-inflammatory abilities and its effects on the immune system.

"Tragically, some children are still being born today with thalidomide-induced limb defects in South America and Africa where it is used as a treatment for leprosy.

"Now we understand which property of the drug causes limb defects, it remains possible that we could make a safer form of the drug that has the clinical benefits for sufferers of leprosy but does not cause limb defects.

"The drug is also used to treat cancer because of its action on blood vessel formation which could stop tumours from becoming larger. Our results indicate not only how thalidomide does this but also suggest it could be a very effective treatment against some early stage cancers."