Hamish the Haggis meets Aberdeen tots at Word
13 May 2009 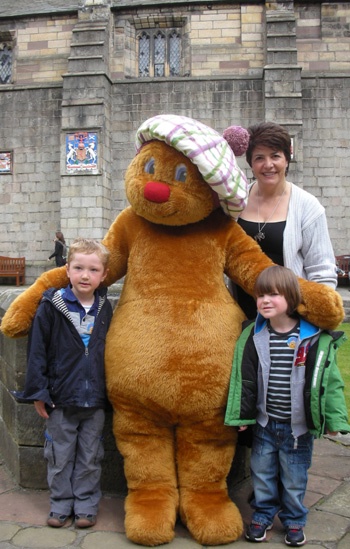 Aberdeen’s nursery-age tots have met up with a 5ft 6’ tall haggis called Hamish as part of this year’s Word Festival celebrations.

The tartan-bunneted children's character is the creation of author Linda Strachan, one of the writers taking part in the Marathon Oil Schools' and Children's Festival, which runs alongside the main Word weekend (May 15-17).

A life-sized Hamish joined Linda at King's College Centre as she read stories from the popular series, including tales about trips to Loch Ness to see Hamish's good pal, Nessie.

Hundreds of youngsters – from newborns to secondary school pupils – will descend on the Old Aberdeen campus over the course of the week for storytelling sessions, monster hunts, comedy shows and theatre performances.

Alan Spence, Word Artistic Director, said: "There is always a fantastic buzz around campus when the Schools' and Children's Festival gets underway. Aside from acting as a perfect taster to the main Word Festival programme, it remains a real source of pride that we are able to put on so many wonderful free events for local youngsters."

This year's Word Festival will see an expected 11,000 visitors treated to a packed weekend of more than 130 events covering poetry and prose, theatre, music, lectures, film screenings, workshops and exhibitions.

More information about the Word programme is available at www.abdn.ac.uk/word/ or call Aberdeen Box Office on 01224 641 122 for tickets.

Issued by
The Communications Team
Directorate of External Relations, University of Aberdeen, King's College, Aberdeen
Phone
+44 (0)1224 272014
Issued on
13 May 2009