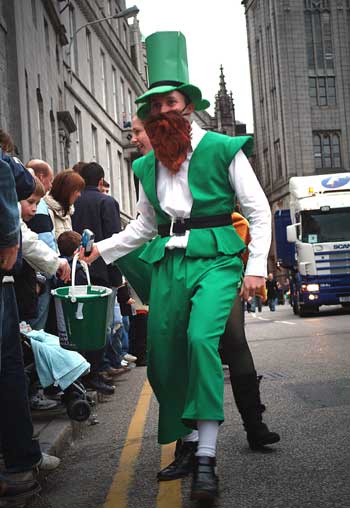 A group of spectators injured in a motor accident during last year’s Torcher Parade have been invited to play a key role in the annual charity event which takes place this Saturday (2 May).

Seven bystanders were hurt when a motorcycle crashed into the crowd who were awaiting the procession of the torch lit parade down Union Street.

The Aberdeen Students' Charities Campaign has invited those injured to ride on the lead charities float of this year's colourful parade, which aims to raise thousands of pounds for North-east charities.

Sandy McKinnon, Vice Principal Charities for Aberdeen Students' Charities Campaign said: "We want to acknowledge those who were injured last year and let them know that we appreciate their continued support of this charitable event.

"The Torcher Parade is successful because of the thousands of people who come out to support us and we wanted to make sure we did something extra for those who had been unexpectedly hit, when all they were doing was waiting to see the annual parade process down Union Street."

12 year old Scott Gray, one of the individuals injured in the crowd last year is looking forward to riding, alongside Charities Campaign mascot Angus the Bull and University of Aberdeen Rector Stephen Robertson, on the lead float which will take the theme of golf.

Scott said: "Last year's accident was terrible but I'm looking forward to being on the lead float and putting it all behind me."

The annual parade, which raises money for over 50 local charities, will claim the streets of Aberdeen this Saturday.

The incident last year forced the parade to be cancelled at the halfway point meaning £10,000 less than normal was raised for charity.

Shannon Tubby, Events and Fundraising Coordinator, says the charities committee have been working harder than ever to make up this funding difference and generate huge excitement over the event.   She said: "The Torcher Parade relies on the generosity of local businesses, student volunteers and of course the watching crowd, to be successful. We're hoping this year will be one of the biggest and best attended Parades in years.  We know people from the North-east are willing to support us and are keen to help us get the event back on track and raise substantial cash for local charities."

The Torcher Parade will begin at Marischal College at 7.30pm and make its way to Queen's Cross via Schoolhill, Rosemount Viaduct, Skene Street and Carden Place, before heading back towards the city centre along Albyn Place and Union Street.