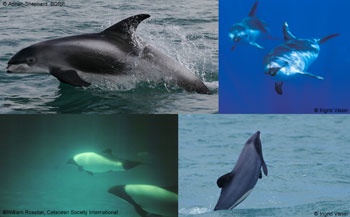 More whales, dolphins and porpoises than was previously thought could be at risk from the effects of climate change, according to a new study.

A University of Aberdeen scientist has found that climate change is likely to affect where 88% of the world's whale, dolphin and porpoise species - collectively known as cetaceans - are found.

Some species, such as the Common Dolphin and the Striped Dolphin, are likely to benefit from warming of the seas caused by climate change because areas of water suitable for them are expected to increase.

For 21% of the world's 78 marine cetacean species this decline in habitat availability could be so dramatic that it will greatly increase the risk of extinction, the research has found.

While polar species, such as the Narwhal and the Beluga are already known to be at risk from any reduction in suitable habitat, this study highlights for the first time that many species found in more temperate waters may also be in jeopardy

Dr Colin MacLeod, a research fellow at the University of Aberdeen, conducted the study. He said:  "In the past, the main concern was for the small number of polar species likely to be affected by a decline in sea ice. However, this new study shows that there are many more species to be worried about.

"Some species found in temperate waters may be at risk not just because of the water temperatures they live in, but also because they only live in shallow waters. These species cannot simply respond to increases in sea temperature by moving into cooler neighbouring areas if the waters there are too deep."

In Europe, the population of White-Beaked Dolphins found in the North Sea and nearby coastal areas, are thought to be at greatest risk, according to the study.  With no other large areas of suitable shallow habitat nearby, this population cannot simply move into cooler waters to the north as temperatures increase.

In the worst case scenario, according to the research, this could lead to a dramatic decline in their numbers and even the loss of the whole population if areas of suitable habitat disappear completely.

Further afield, a variety of temperate water species found in shallow waters around the coasts of South America, South Africa, Australia and New Zealand are also at high risk, the research found.

This includes an entire group of poorly-known dolphin species, those of the genus Cephalorhynchus, various porpoise species and southern hemisphere relatives of the White-Beaked Dolphin.

Even species whose habitat could expand may face other problems, according to the research. Moving into new areas could see cetaceans mixing with other species they normally don't mix with which could lead to them being exposed to new parasites and diseases to which they have little or no immunity.

Dr MacLeod also warns that expanded habitats could see species moving out of areas set up to protect them, potentially increasing their exposure to other human impacts such as bycatch in fisheries.

Understanding how the distribution of cetacean species is likely to be affected by climate change will need to become an increasingly important component of any conservation plans as waters warm, the study suggests.

Dr. MacLeod added: "Without this understanding, we cannot plan for the future and we may be left simply watching species disappear from areas where they were once common as the full impacts of climate change start to bite."

Future work planned by Dr MacLeod will use computer modelling to provide a more detailed picture of how different species are likely to react to future changes in climate. This will allow these changes to be taken into account when working out how best to conserve whales, dolphins and porpoises around the world now and in the future.

Dr Colin MacLeod is available for interviews and photographs. To arrange please contact Jennifer Phillips on 01224 273174.

Photographs of a variety of cetacean species to accompany this press release are available on request.

The species which are at greatly increased risk can be divided into five groups of related species:

1. Both species of Monodontid: The Beluga and the Narwhal.

2. Five of the world's six species of porpoise: The Harbour Porpoise, the Vaquita, the Spectacled Porpoise, Dall's Porpoise and Burmeister's Porpoise.

4. Three of the world's six species in the genus Lagenorhynchus: The White-Beaked Dolphin, Peale's Dolphin, and the Dusky Dolphin.

5. Two species of baleen whale: The Bowhead Whale and the Southern Right Whale.

The areas of the world where these species may be particularly affected include northern Europe (including the United Kingdom, Ireland and Scandinavia), New Zealand, Australia, South America and the Arctic.

Of the 19 species regularly recorded in the waters around the UK and ROI, climate change is expected to result in a reduction in distribution for 37% of species.  For a further 37% it is likely that there be no change and for the remaining 26% of species there is likely to be an increase in distribution. Five species are likely to become much rarer and could potentially disappear from the waters around the UK and ROI.  These are the White-Beaked Dolphin, the Atlantic White-Sided Dolphin, the Northern Bottlenose Whale, Sowerby's Beaked Whale and the Long-Finned Pilot Whale. Of these, the White-Beaked Dolphin is likely to be affected to the greatest extent because its distribution is restricted to shallow waters.  There is also concern for the Harbour Porpoise which could also suffer a major decline in its distribution because of its coastal habitat preferences. Species that are likely to benefit from an increased distribution include the Common Dolphin, the Striped Dolphin and Cuvier's Beaked Whale.  Finally, some species are likely to start occurring regularly in the UK and ROI, most of which have only been recorded on a few occasions in the past.  These may include the Pygmy Sperm Whale, False Killer Whale, Pygmy Killer Whale, Short-Finned Pilot Whale and True's Beaked Whale.