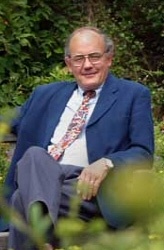 One of the world’s leading authorities on bats who has greatly furthered our understanding of the nocturnal mammals has retired from the University of Aberdeen.

Paul Racey, Regius Professor of Natural History, has stepped down from his Zoology post after 36 years at Aberdeen.

During that time thousands of students have been taught by the 65-year-old professor who has published more than 200 scientific papers, co-edited a number of books and has a new book Island Bats out later this year.

Over the years Professor Racey's research group has made a number of research breakthroughs and these include the discoveries that:

The father-of-three and grandfather of five can also take great pride in the fact that a small furry mammal now flies about the Madagascan skies bearing his name.

Pipistrellus raceyi  was named after Professor Racey after he netted a bat he didn't recognise during a trip to the Indian Ocean isle where he and his research group have spent more than 20 years working on the conservation of the creatures because they are not protected there.

Last year BBC Wildlife named Professor Racey as one of their 50 Conservation Heroes. Later this year he will receive a Lifetime Achievement Award from the Bat Conservation Trust – an organisation which he helped to launch.

These are just two of a number of accolades bestowed on Professor Racey who has held a wide range of appointments on many key conservation groups and who also founded five University research groups that still exist today.

Professor Racey currently lives with his wife Cilla near Oldmeldrum where they have sheep, a Highland pony and a thoroughbred horse who is the great granddaughter of champion Derby winner Mill Reef.

But life is about to change for the researcher who has no plans to take life easy, and will continue his research on the bats of Madagascar, supported by a Leverhulme Emeritus Fellowship.

"I have really enjoyed my 36 years at the University of Aberdeen, however we are selling our home in Aberdeenshire and moving to Cornwall as I have a Visiting Professorship at the Centre for Ecology and Conservation at The University of Exeter in Cornwall.

"I will miss the North East and our horses as I enjoy riding every week but am now looking forward to an exciting new start and replacing horses with boats as I also enjoy sailing."