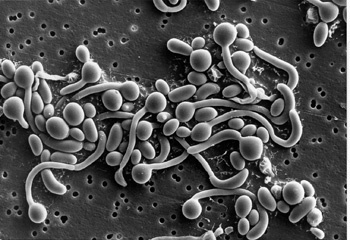 Scientists have unlocked the code for the building blocks of fungal organisms which are responsible for mild as well as potentially deadly infections in people.

Cracking the genetic code of six species of Candida - the most common cause of fungal infection worldwide – is a major step towards finding new therapies for treating the health problems caused by these organisms.

Candida albicans is perhaps best known to most as it can cause thrush in women and babies, although this is easily treated.

However several Candida species can pose a far more serious threat to people whose immune systems are compromised, leaving them vulnerable to fungal infections.

These include cancer and trauma patients and those who have undergone bone and organ transplants.

Now in a paper published in Nature an international team of scientists - including University of Aberdeen researchers - report that they have cracked and analysed the genetic code of six Candida species.

Professor Neil Gow, Chair in Microbiology at the University of Aberdeen, said: "This is a landmark paper in the field of fungal research.

"Understanding the genome sequences of these Candida species gives us a blueprint for increasing our understanding of the diseases caused by these organisms.

"Some species of Candida can cause serious and life threatening infections in patients whose immune systems are suppressed which makes them more susceptible to fungal infections.

"The mortality rate of someone who has contracted septicaemia caused by Candida is about 30% to 40%.

"While understanding the genetic make-up of Candida does not in itself give us a cure or a new treatment, it does give us a toolbox for tackling the organisms.

Professor Neil Gow, Dr Carol Munro, Dr Carol Munro, Professor Al Brown, Dr Ian Stansfield and Dr Steven Bate were the Aberdeen researchers who were part of the international collaboration that analysed the genome sequencing that was decoded by the Broad Institute of MIT and Harvard.

Their subsequent findings also revealed the relationships of Candida species to each other and discovered why some species seem to have lost the ability to mate.