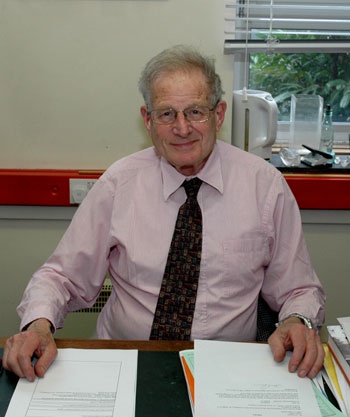 The outstanding career of an Aberdeen academic whose work has shaped global knowledge and understanding of cement science will be celebrated later this week.

Fred Glasser, a Professor of Chemistry at the University of Aberdeen, will be honoured by a three day symposium held at the institution from 17 – 19 June.

A Fellow of the Royal Society of Edinburgh and of the American Ceramic Society, Professor Glasser's highly significant discoveries in areas of cement science, including radioactive waste management and sustainability, have earned him recognition as a leading authority in his field.

In his academic career he has worked with key international agencies including the European Commission and The United Kingdom Atomic Energy Authority (UKAEA), has published more than 450 scientific papers, and edited a number of books.

Developed to coincide with his 80th birthday, the conference will bring together over 100 delegates to explore themes which have been central to Professor Glasser's research.

Key experts in cement science from across the globe to speak at the symposium include Professor Karen Scrivener from Ecole Polytechnique Fédérale de Lausanne in Switzerland and co-ordinator of the European academic-industry cement research consortium, Nanocem, and Professor Francis Young, formerly from the University of Illinois at Urbana-Champaign.

Professor Donald Macphee, from the University of Aberdeen's School of Natural and Computing Sciences and co-organiser of the symposium said: "The three day event is designed to celebrate the important contribution Professor Glasser has made to the field of cement science.

"Created to coincide with his 80th birthday, the symposium will focus on six key themes in which Professor Glasser has made a significant impact – from hydration and durability through to waste management and sustainability.

"Creating a unique forum for discussion of the latest topics and debates in this field of chemistry, it is hoped the symposium will provide a fitting tribute to Professor Glasser who is renowned as a key international figure in this area of academia."

The symposium is endorsed by the American Ceramic Society.

For more information on the symposium visit http://www.nanocem.org/glassersymposium