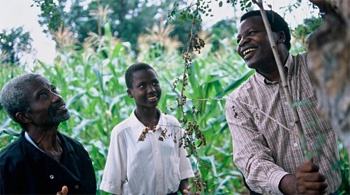 A pioneering project involving local young people working to save the ecology of Africa’s highest mountain will be the subject of a fascinating public talk at the University of Aberdeen on Tuesday 23 June.

Visiting the University is Sebastian Chuwa, the award-winning Tanzanian botanist, conservationist and campaigner, known internationally for his work with young people to protect fragile environments and ecology through the planting of trees.

Sebastian Chuwa will speak about his major project in the reforestation of Mount Kilimanjaro in East Africa, where he was born and still lives, planting trees to preserve the ecology of the mountain and the economic wellbeing of the communities who live there.

The event takes place at 3pm in the Lecture Theatre on the ground floor of the University's Zoology Building on Tillydrone Avenue at the roundabout with St Machar Drive.

All are welcome, no booking is necessary, and entry is free.

In his talk Mr Chuwa will show photographs and explain how global warming threatens to destroy the snow-capped glaciers on Tanzania's Mount Kilimanjaro and reduce the regular water supply on which the region's farmers depend. Deforestation could make the problem worse. However, in the last few years he has led a tree planting project that has seen nearly two million tree seedlings planted by schoolchildren and communities around the mountain and other regions of northern Tanzania.

Sebastian Chuwa was born in 1954 in Sungu Village, on the slopes of Mount Kilimanjaro. He was educated in botany, studied in Kew Gardens in England, and took an International Diploma in Botany in Stockholm, Sweden. He worked as a safari guide for over 30 years, guiding tourists to the wealth of natural beauty in the northern Tanzania park system, including Ngorongoro Crater, Lake Manyara, the Serengeti Plains, and Lake Victoria.

Mr Chuwa has worked in a volunteer capacity as a conservationist throughout his adult life. His particular love is planting trees and he is a champion of the mpingo, or African Blackwood, tree, the National Tree of Tanzania. This tree has important international uses for the manufacture of woodwind instruments and within Africa it is used by native carvers.

He has organised various youth environmental clubs to implement tree planting, working with local conservation networks in schools called Malihai Clubs and also with Jane Goodall's Roots and Shoots Clubs, seeking to impart a sound environmental conservation education to the thousands of children that this work has reached.

Sebastian partners with a US team who have founded the non-profit organisation African Blackwood Conservation Project in promoting and implementing tree planting and environmental conservation education in northern Tanzania. In recognition of his conservation work, Sebastian has been honoured with several international awards.