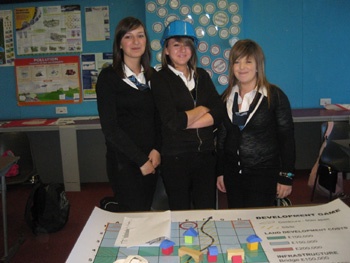 From how Google Earth is enabling us to virtually fly across the globe, to the challenges of building a housing development, a new University of Aberdeen roadshow series is helping children from schools across Aberdeen city and shire, discover how science is shaping the way we live.

Hosted by experts from the institution's School of Geosciences, the series aims to give pupils an insight into how science and technology can help us understand the environment and the world around us.

Launched this week, the roadshow will visit a total of 13 schools and over 300 S5 and S6 pupils before culminating next Tuesday (23 June).

Topics such as the link between flooding and climate change, and the way in which satellite navigation systems are helping us to travel throughout the world, are being explored through hands on workshops delivered by University scientists.

The way in which housing developments are planned and built is also being investigated through an interactive giant floor game which sees pupils competing to create their own design vision at the lowest possible cost.

Professor David Macdonald, Head of the School of Geosciences, University of Aberdeen said: "The roadshow is designed to engage school pupils with the topics of geography and environment, by demonstrating how these subjects apply to a wide range of areas in our day to day lives.

"Highly topical issues such as climate change and current technology including Google Earth and GPS systems are being used in the workshops as a very natural way of helping the pupils understand the real life application of the subjects which they study at school and may go on to study in higher education."

"By taking the topics of geography and the environment away from the textbook and into a real life context, we are aiming to show pupils how the subjects they may choose to study as they progress to University have a meaningful impact and relevance to how they live and the world around them."

The University of Aberdeen Geography and the Environment Roadshow began on Monday (15 June) and will run until Tuesday (23 June).