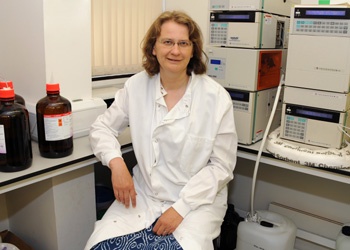 Scientists have discovered that abnormalities in a gene important for learning and memory are a cause of autism.

The University of Aberdeen finding could hold the key to the future development of new treatments for autism - a brain development disorder which affects how a person communicates and relates to others.

In a study published today in the Journal of Medical Genetics the researchers explain how their investigations into the gene EIF4E began with the study of one child with severe autism.

The boy attended Aberdeen Royal Infirmary's Genetics Clinic where he was found to have a rare re-arrangement of chromosomes.

Using state of the art genetic mapping techniques, researchers went on to discover that the re-arrangement had disrupted the EIF4E gene.

The team then looked in more detail at the make-up of EIF4E in 120 other families with autism.

They found that four children from two families also had abnormalities in thisgene.

In these four cases an abnormal extra building block in the control region of the gene was found to be disrupting the normal balance of protein production by brain cells.

The resulting imbalance makes the brain more prone to the repetitive thought processes that are seen in autism.

The detection of a link between the gene and autism opens up a potential new target for treatment in the future.

Researchers say their discovery is particularly significant because of the impact EIF4E has on other genes. It acts as a gateway or channel for many other genetic signals already known to cause autism.

These findings raise the possibility that correction of EIF4E abnormalities could improve symptoms of autism, not only in those whose condition is caused by changes in EIF4E, but also in those in whose autism is caused by the genetic signals that pass through EIF4E.

Dr Zosia Miedzybrodzka, Reader in Medical Genetics at the University and Honorary Clinical Geneticist at NHS Grampian, led the research. She said: "We are very excited to have made the link between autism and a gene that is already known to play a key role in memory and learning.

"Although abnormalities to this gene are relatively uncommon, our discovery is particularly important because several genetic signalling pathways, already known to cause autism, are channelled through this gene.

"Our finding paves the way for development of new treatments for this common and upsetting condition.

"We are now seeking funding to carry on our work. While it is still early days we believe our findings offer hope for the future for some of the many families who are living with autism."

The parents of the child with the rare re-arrangement of chromosomes, who wish to remain anonymous, said: "The team have done a brilliant job and we are delighted that the work that started with our son brings such hope for the future".

Dr Miedzybrodzka added: "It is thanks to the dedicated work of a team of researchers with different skills, including Dr Maria Neves-Pereira, Professor David St Clair and Dr Berndt Muller, and the generous contributions of samples from the affected families, and the support of our colleagues and our funders, that this discovery has been made."

The research was funded by the Scottish Government's Chief Scientist Office, NHS Grampian, University of Aberdeen and an anonymous donation to the University's Development Trust.