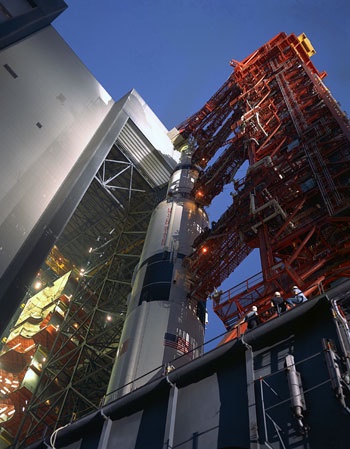 A leading science writer and broadcaster will visit Aberdeen next month to provide a unique insight into the mission to place the first man on the Moon.

Dr Chris Riley – who has directed and produced over 80 programmes for the BBC, including Tomorrow's World - will give a talk detailing the background to the Apollo 11 mission which saw US astronaut Neil Armstrong take the famous first steps onto the Moon's surface.

The free event, which takes place at the University of Aberdeen on 28 July at 6pm, has been created to coincide with the 40th anniversary of the historic mission.

Dr Riley will provide an insight into his work documenting and analysing the momentous flight of Apollo 11 and the other eight manned flights to the Moon undertaken by NASA.

Dr Riley's 2007 film documentary, In the Shadow of the Moon, which chronicles the stories of many of the astronauts who flew to the Moon between 1968 and 1972, and his spin off series for the Discovery Science Channel Moon Machines - which tells the stories of the 400,000 engineers who made the dream of Apollo a reality - will form the basis of his talk.

In the Shadow of the Moon won the World Cinema Audience Award at the 2007 Sundance Film Festival, and Moon Machines won a Grand Remi this year at the Houston International Film Festival.

Dr Riley said: "The science and technology which went into making the Apollo 11 mission the first successful manned Moon landing, was immense.  Over 400,000 men and women across America worked on the project over many years to ensure complete success of the over seven  million parts which went into a fully stacked Saturn V.

"Drawing from my documentary In the Shadow of the Moon, and my new book The Apollo 11 Owner's Workshop Manual my talk will focus on the individual stories of these engineers whose vision made the mission possible and changed the face of history forever."

Dr Riley's talk is one of two events being hosted by the University to commemorate the Apollo 11 anniversary.

Dr Ken Skeldon, from the University of Aberdeen Public Engagement with Science Unit will give a talk looking at the many myths surrounding the Apollo missions on Wednesday 8 July at 7pm, as part of the University's Café Scientifique series.

Taking place at Waterstone's Union Bridge branch in Aberdeen, Dr Skeldon's talk will debunk the various conspiracy theories surrounding the moon landings which aim to suggest the missions had been faked.

Chris Riley's talk, Engineering Apollo – Stories of the 400,000, will take place on Tuesday 28 July at 6pm in the King's College Conference Centre, on the University's Old Aberdeen campus.

Entry to the talk is free but advance registration is advised.  To register or for further information visit http://www.abdn.ac.uk/science/apollo/ or contact 01224 273874.

Café Scientifique will be hosted once a month until October in the Costa Coffee café of Waterstone's Union Bridge branch.