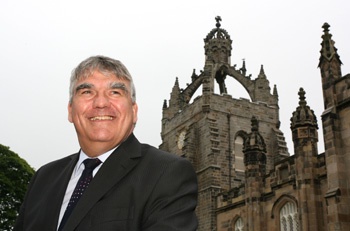 The University of Aberdeen’s governing body, the University Court, has appointed Sir Moir Lockhead, Deputy Chairman and Chief Executive of FirstGroup plc, to the position of Senior Governor.

Sir Moir is looking forward to leading the governors of the University and said: "It is a great privilege and honour to have been appointed to this role by the Court.

"I have enjoyed my time serving as a Court member and look forward to the exciting times ahead. The University has made some remarkable progress over the past few years towards becoming one of the top one hundred universities in the world. It's an exciting time and I am looking forward to leading the Court's efforts to help realise the University's ambition."

Sir Moir will take over from Dr Alistair Mair who will continue to be a member of Court as Chancellor's Assessor.

Professor Sir Duncan Rice, Principal and Vice-Chancellor at the University is pleased at the appointment and said: "It is wonderful news that Sir Moir is to take on the role of Senior Governor. He has had an extremely distinguished international career and is hugely experienced. The University is delighted that we will be able to draw upon his experience and wisdom as we strive to build further upon the many successes we have enjoyed in recent years."

Sir Moir was awarded an Honorary Chair from the University in June 2004 and has served as a Court member since August 2002. He is Chief Executive of Aberdeen based FirstGroup plc, the leading transport operator in the UK and North America.

Sir Moir has been appointed to serve as Senior Governor and Vice-Chair of the University Court for a period of three years, commencing 1 August, 2009. The post is unremunerated.

Sir Moir Lockhead is a governor of the University and Chairman of its Operating Board. He joined Grampian Regional Transport in 1985 as General Manager and in 1989 he led a successful employee/management buy-out of the company. The company was listed on the London Stock Exchange in 1994. In the following year, the Company merged and created "First" when he became Deputy Chairman and Chief Executive.

FirstGroup plc is now the world's leading transport group with annualised revenues of over £6 billion a year. The company employs approximately 136,000 staff throughout the UK and North America and moves some 2.5 billion passengers a year. FirstGroup has grown to become the UK's largest bus and rail operator and the largest surface transport operator in North America, running approximately 60,000 yellow school buses and the iconic Greyhound – the only national provider of intercity bus services.

Sir Moir was Chairman of Scottish Enterprise Grampian from 1998 to 2001, having been a Non-Executive Director since 1993. In 1996 he was awarded an OBE in the Queen's Birthday Honours. Amongst many awards won throughout his career Sir Moir was named Scotland plc Chief Executive of the Year in 2007 and IoD Scotland Director of the Year in 2008. Also in 2008 Sir Moir was awarded a Knighthood for services to transport in the Queen's Birthday Honours List.