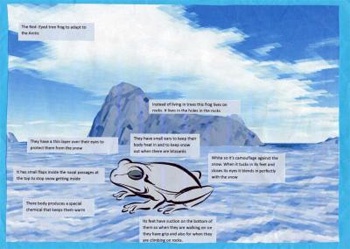 Hundreds of school kids from across Scotland took up a challenge which got them thinking of climate change and its impact on animals.

The University of Aberdeen's Natural History Centre asked secondary pupils to choose an animal and then imagine how it might adapt to live in a completely different habitat.

The youngsters then had to design a poster showing what the animal would look like in its new surrounds.

The "location, re-location"! poster contest captured the interest of 700 pupils who submitted posters from 34 schools across the country.

The competition - which involved art, geography and science departments - also attracted high praise from teachers because of how well it worked with the school curriculum.

But it was the imagination of Ashleigh Cox from Kinross High School that scooped the top award of a digital camera donated by John Lewis.

Ashleigh's poster depicts a red eyed tree frog - normally found in the rain forests of Costa Rica - that had undergone changes to its body so it could adapt to life in the Arctic.

The reserve winners were:

Marie Fish, Education Officer at the Natural History Centre, organised the poster competition as part of the University's celebrations marking 200 years since the birth of famous naturalist Charles Darwin.

She said: "Our location, re-location poster competition was incredibly successful with around 700 entries from schools across Scotland.

"I thought we had set pupils a pretty tough challenge but they all tackled the idea of adaption and climate change in really innovative and interesting ways.

"The competition also grabbed the imagination of many teachers who said they would repeat the exercise next year because it worked well with the curriculum.

"It was incredibly hard choosing our winner, reserve winners and runners up because the entries really were of a fantastic standard."

Dr Andy Schofield, Science Promotion Co-ordinator at the University of Aberdeen, added: "We were delighted to receive so many good quality entries, especially since this was the first time we have done a Scotland-wide competition.

"Our poster competition has been a great opportunity for pupils to learn about a scientific concept and then express their understanding of it in a creative way."

Around a dozen children which include the winner, reserve winners, runners up and those commended are attending a special prize giving ceremony lunch at Aberdeen's David Welch Winter Gardens in Duthie Park at 12 noon today. The winning posters will be on display.