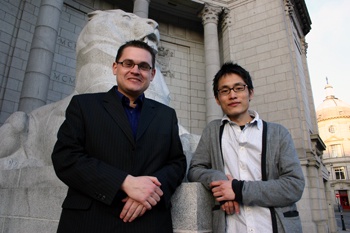 Aspiring composers from around the globe have until the end of May to enter a score for the 2009 University of Aberdeen Music Prize.

Dozens of entries from as far afield as Japan, the USA, Australia and Ukraine have already been received for the prestigious biennial competition, which was set up in 2005 to unearth 21st century compositional talent.

Now organisers have made the final calls for scores, with the closing date for entries coming on Friday, May 29.

The Aberdeen Prize – as it has become known in musical circles – represents a unique collaboration between the University of Aberdeen and the BBC Scottish Symphony Orchestra (SSO), and will be judged by the pre-eminent Scottish composer James MacMillan.

An expert panel will whittle down the entries to just five composers, who will be brought to Aberdeen in November 2009 for a series of workshops with MacMillan and members of the BBC SSO.

The winning composer will be awarded £5,000 in the form of a commission to write a full piece for orchestra, which will be premiered by the BBC SSO at Aberdeen Music Hall before being broadcast on BBC Radio 3.

Under the patronage of Dame Evelyn Glennie, the competition forms the centerpiece of a weekend of hands-on events, workshops and concerts in the Granite City.

Dr Paul Mealor, Senior Music Lecturer at the University of Aberdeen and Director of the Aberdeen Prize said: "Since it was first launched, this search for creative talent has helped to develop Aberdeen's role as one of the major cultural centres in the UK. Composers from across the world have embraced the competition, earning the Aberdeen Prize a growing reputation and prestige in compositional circles.

"We are also honoured to have such a well respected judge in James Macmillan, and in the BBC SSO we have a body of musicians that understands the techniques of modern music better than anyone."

Gavin Reid, Director of the BBC Scottish Symphony Orchestra, said: "The BBC SSO has an international reputation for promoting new music and encouraging the work of young composers, and so we're delighted to continue our partnership with the University of Aberdeen Music Prize."

The University of Aberdeen Music Prize is open to composers of any nationality, with no age limit or restrictions. Closing date for applications is 5pm on Friday, May 29, 2009.

For information on the BBC Scottish Symphony Orchestra, contact Stephen Duffy on 0141 422 6730.

The BBC Scottish Symphony Orchestra is one of the UK's leading orchestras, with an international reputation for artistic excellence. It has an unparalleled commitment in Scotland to new music, and complements the Aberdeen Music Prize's aim to encourage excellence in contemporary composition. With a busy broadcasting schedule on BBC Radio 3, BBC Radio Scotland and BBC Television, the orchestra takes live music to towns and cities across the country every season, plays every summer at the BBC Proms, and is in demand at major international festivals. As well as being the leading supporter of living composers and new music in Scotland, the orchestra is extremely active in the community with an innovative learning programme dedicated to bringing the inspiration of great music to people of all ages and backgrounds. The BBC Scottish Symphony Orchestra is the recipient of the 2008 Gramophone Award for Best Contemporary Recording.