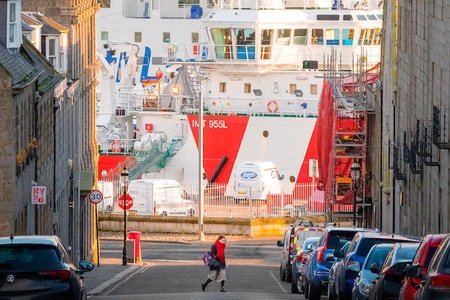 Researchers from the University's Just Transition Lab have published their first report on delivering a Just Transition for workers and communities in the north-east of Scotland in which they consider how the industry has shaped the region to date and set out the existing visions for its future.

The report concludes the first phase of a larger project aiming to deliver a set of measurable indicators and scenarios for a Just Transition in Aberdeen and Aberdeenshire.

The team, comprising Dr Daria Shapovalova, Lecturer in Energy Law; Professor Tavis Potts, Dean for Environmental Sustainability; Dr John Bone, Senior Lecturer at the School of Social Science; and Professor Keith Bender, SIRE Chair in Economics at the Business School, carried out a rapid evidence review to establish what existing evidence from academic and other literature says about the ways in which the oil and gas industry has shaped the region. They also looked at the different scenarios for delivering a Just Transition in Aberdeen and Shire.

The work included searching academic databases, online search platforms and archival materials in the Aberdeen City Library as well as the reference collection at the Sir Duncan Rice Library at the University. Overall, the team reviewed over 4,000 sources and, after screening, ended up with 173 sources for evidence extraction.

Our next steps on the project are to deliver measurable Just Transition indicators for the region through a participatory workshop as well as to collect data for these indicators." Project lead Dr Daria Shapovalova

The report reviews the numerous benefits of being an ‘oil capital’ for Aberdeen – such as the population growth, employment rates, higher average earnings, improvement in local infrastructure and services, pride in being a centre for excellence in oil and gas, and now, in energy transition.

It also discusses the challenges, which received much less attention in literature and reports, namely – the impact on income and gender equality, pressure on housing and local authorities, decline in traditional industries, vulnerability of the region to fluctuations in the oil sector, as well as the lack of local control.

The report reviewed the evidence of Just Transition initiatives in the region - the role of the north-east in the work of the Scottish Government’s Just Transition Commission, the Aberdeen City Council Net Zero Route Map 2045, as well as initiatives from academia and the third sector.

Project lead Dr Daria Shapovalova said: “Our next steps on the project are to deliver measurable Just Transition indicators for the region through a participatory workshop as well as to collect data for these indicators. We are grateful to our steering group and the many reviewers whose feedback was crucial in completing this work.”

The report, which is funded by Uplift, can be found here.