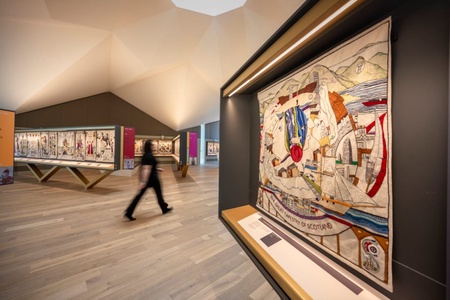 An independent study led by the University of Aberdeen's SPOT (Social and Innovative Platform on Cultural Tourism) Team has highlighted that the five-star Great Tapestry of Scotland visitor centre in Galashiels has improved public perception of the historic Borders town.

The research revealed today (Monday 16 January) also found that the centre was the key reason that 60% of holidaymakers interviewed visited the area.

Surveying over 460 visitors to the centre between April and September 2022, the SPOT Team discovered that:

The study was conducted as part of the University’s SPOT project, which aims to understand and address cultural tourism across Europe and to promote its role in regeneration. The project team will present their findings at the centre on 27 January 2023.

Speaking about the report published today Research Fellow Dr Stephanie Garrison said: "Our research shows that visitors strongly agree that this new five-star visitor centre is a wonderful addition to Scotland’s cultural tourism offerings. Almost unanimously visitors said they found interesting things to see in the centre, 98% agreed or strongly agreed that they liked the atmosphere of the building, and 94% even said it increased their knowledge."

“Working with the team at the Great Tapestry of Scotland, we will use these insights to further explore opportunities for this fantastic national asset to support continued regeneration in the south of Scotland.”

Welcoming the findings, Sandy Maxwell-Forbes, Centre Director at The Great Tapestry of Scotland said: “We are thrilled to see that these results are overwhelmingly positive, backing up the fantastic reviews we are getting from visitors, in the media, online and in social media. Our team has navigated through a global pandemic, a nation-wide hospitality recruitment shortage and the ongoing cost of living crisis to create one of the nation’s top-rated visitor experiences right here in Galashiels, the heartland of the Scottish Borders.

“As the home of the people’s story of Scotland, it is important to us that our visitors help to inform our ongoing story, so we’re also delighted that the report contains some really useful constructive feedback which will help us to continually improve build on success.”

Suggestions to tell even more stories behind each of the images featured in the panels will be at the heart of a new promotion for the Tapestry, which will be revealed in the coming weeks.

The Great Tapestry of Scotland, which tells a compelling visual account of the people’s story of Scotland, opened to great media, visitor and architectural acclaim in 2021, exceptionally securing five-star visitor attraction status from VisitScotland on first inspection. In its first year, visitor numbers were in line with a post-pandemic revised business case by Jura Business Consultants (February 2021), which reflected covid implications on visitor numbers, but did not factor in the additional impacts of the recruitment crisis, the current cost of living crisis and rail strikes. The attraction sold over 24k tickets, recorded 52.3k visits through the doors and experienced over 60k business transactions.

Many visitors took advantage of the year-round ticket options, as reinforced by the University of Aberdeen research which showed 30.2% of those surveyed were returning visitors.

The University of Aberdeen also found that the visitor demographics reflected the post-pandemic national tourism trend for domestic holidays: 28.3% of visitors to The Great Tapestry of Scotland lived locally, 61.2% came from elsewhere in the UK, with the remaining 10.4% coming from overseas (with the USA, Australia, New Zealand and Canada being the most predominant countries).

National tourism leaders are hailing the attraction, based in the Scottish Borders, a triumph over adversity, as it opened amidst some of the most significant national and global crises the industry has ever experienced.

Gordon Morrison, CEO of ASVA said: “In the current climate, with all the issues affecting our sector, the Great Tapestry of Scotland has done incredibly well to attract the volume of visitors that it has. The team is doing a fantastic job, especially when, like so many of our members, they are unable to work at full capacity due to the ongoing recruitment crisis and we’re seeing visitor numbers down on pre-pandemic levels across much of the sector due to factors such as the cost-of-living crisis and the legacy of the pandemic.

“This five-star visitor attraction is a fantastic addition to the great tapestry of outstanding experiences offered in the Scottish Borders. I truly believe it could be one of our leading lights for many years to come.”

VisitScotland Destination Development Director for the South of Scotland Annique Armstrong added: “The Great Tapestry of Scotland has been a fantastic addition to the visitor offering in Galashiels since it opened in 2021. Despite the challenging operating circumstances in recent years, the Great Tapestry of Scotland has continued to go from strength to strength and, as this research shows, has had a positive impact on the town centre and local businesses in Galashiels.

“The Great Tapestry of Scotland is one of Scotland’s must-see national visitor attractions and a great example of how tourism is a force for good, benefitting the economy and communities of the south of Scotland, and enhancing the wellbeing of everyone who visits.”

The centre has been welcomed by retailers in Galashiels, who have reported a noticeable increase in footfall since the Tapestry first opened. Mike Gray, chair of Energise Galashiels Trust, said: “It’s brilliant to see the hugely positive impact that the Great Tapestry of Scotland and our associated Energise Galashiels Trust regeneration initiatives, which are funded by South of Scotland Enterprise and Scottish Borders Council, are delivering in our town centre.

“The results from the University of Aberdeen’s study reinforce what we’re seeing on the ground. There really is a renewed positivity about Galashiels with many businesses reporting increased footfall from those who have come to see our town’s new five-star visitor attraction.”

Councillor Euan Jardine, Leader of Scottish Borders Council added: “It is very gratifying that following the significant investment made into developing the Great Tapestry of Scotland visitor centre in Galashiels we have such strong evidence of it drawing in tourists to the Scottish Borders, and generating significant numbers of return visitors.

“Supporting the regeneration of Galashiels town centre was a key driver for bringing the Great Tapestry of Scotland to the town and it has helped to bring in many millions of pounds of investment from a whole range of partners. That investment not only helped us develop the visitor centre but also support community-led regeneration projects, particularly through Energise Galashiels Trust.”

The Great Tapestry of Scotland visitor centre, located close to Galashiels Transport Interchange, is part of a critical town centre regeneration project which has received investment from the Scottish Government through its Regeneration Capital Grant Fund, the Borders Railway Blueprint programme and Scottish Borders Council.

It was purpose built to house The Great Tapestry of Scotland, one of the world’s largest community arts projects. Hand-stitched by a team of 1,000 stitchers from across Scotland, The Tapestry charts 420 million years of Scotland's history, heritage, innovations and culture through 160 compelling panels. It was the brainchild of globally-renowned author Alexander McCall Smith and designed by artist Andrew Crummy based on a narrative written by Scottish Borders-based award-winning writer and historian Alistair Moffat.

As well as permanently displaying The Tapestry itself, the new visitor attraction is home to a workshop space - where visitors can meet the makers, a café showcasing local food and drink, a shop and Gallery 1420, which is currently hosting Metamorphosis, a new national exhibit curated by Heriot Watt University’s School of Textiles and Design which is also located in Galashiels. Through an evolving series of innovative and thought-provoking displays, the exhibit will showcase the role the design industry could play in combating climate change and reducing the global carbon emissions of historically highly greenhouse gas intensive industries.

The University of Aberdeen's SPOT project team is one of the 15 research teams participating in this EU funded Horizon 2020 project. Using the acronym 'SPOT', the project's full name is “Social and Innovative Platform on Cultural Tourism and its potential on deepening Europeanisation”. The project is co-ordinated by Mendel University's (Brno, Czech Republic) SPOT team.