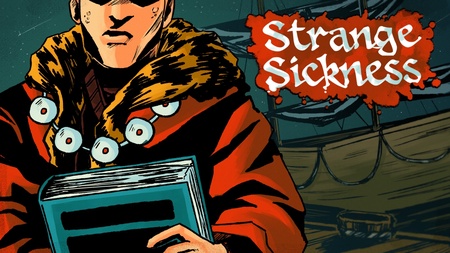 A video game based on the work of University of Aberdeen historians has been nominated for the 2022 BAFTA Scotland Awards, the biggest celebration of Scottish film, games and television talent.

Strange Sickness, led by Dr Jackson Armstrong and Dr William Hepburn, is a digital narrative game which brings people face-to-face with life in Scotland during the Middle Ages.

It is based on and inspired by the events, descriptions and people recorded in Aberdeen’s UNESCO-recognised Burgh Records, which University historians have spent the past decade painstakingly transcribing.

The records contain unique details about how the town of Aberdeen dealt with the threat of the plague and the researchers used this as the basis for the game of interactive fiction.

It is one of three nominations in the ‘Games’ category of the 2022 BAFTA Scotland Awards and will compete for the award against Hercule Poirot: The First Cases and The Longest Walk.

BAFTA – the British Academy of Film and Television Arts - is a world-leading independent arts charity that brings the very best work in film, games and television to public attention and supports the growth of creative talent in the UK and internationally.

Through its Awards ceremonies and year-round programme of learning events and initiatives, BAFTA identifies and celebrates excellence, discovers, inspires and nurtures new talent, and enables learning and creative collaboration.

Strange Sickness was funded by a Kickstarter campaign which attracted global backing, and development of the game was headed by Dr Hepburn, who created the concept for the game and wrote the story. The game’s mechanics were designed by game developer Katharine Neil while the game’s visuals were created by artist Alana Bell.

Dr Jackson Armstrong led the Burgh records research on which the game is based and was also directly involved in the making of the game. He said they were ‘surprised and thrilled’ to learn that Strange Sickness had been nominated.

“The BAFTA Scotland Awards celebrate and reward the highest achievements in Scottish film, television and games talent and we are beyond delighted to see Strange Sickness shortlisted alongside such prestigious talent.

“Games are an amazing tool to help people imagine the past and the Burgh Records are an outstanding resource to help us understand life in the Middle Ages. To see a game using historical records recognised in this way is a real boost for our collaborative research efforts with the Aberdeen City & Aberdeenshire Archives.”

Dr Hepburn added: “The game allows players to immerse themselves in Aberdeen’s history, interact with characters from medieval society and make decisions which will shape their own story.

“Katharine Neil and Alana Bell did an amazing job of bringing our research and ideas to life and the feedback we have received from players has been fantastic.”

Jude MacLaverty, Director of BAFTA Scotland said: “The strength and breadth of this year’s nominations are testament to the dedicated, creative and extraordinarily talented people working in the Scottish screen industries. Yet, 2022 remains an uncertain and challenging time for the sector, and as an arts charity we understand the incredible financial pressures that organisations and individuals are currently facing.  In showcasing and celebrating all the nominees at the ceremony next month, the BAFTA Scotland Awards will be an opportunity to reiterate the case for support and recognition of Scotland’s incredible creative community and its phenomenal output.”

Profits raised from the first year of sales of Strange Sickness will be split equally between the Lord Provost’s Charitable Trust and vaccinaid.org, a UNICEF initiative to deliver Covid-19 vaccinations to the most at-risk people around the world.