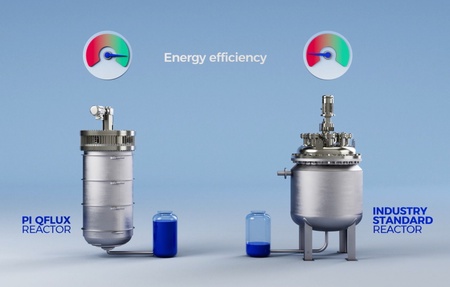 Scientists from the University of Aberdeen have played a key role in the development of an industrial-scale batch reactor that could dramatically improve energy efficiency in the chemicals sector, the world's third largest industrial emitter of CO2.

Academics from the School of Engineering have worked with Scottish chemical engineering firm Process Technology Strategic Consultancy (PTSC) in the development of the PI QFlux batch reactor, which can produce chemical products much faster, using far less energy, than traditional batch reactors.

As well as cutting operating costs for chemical producers, the PI QFlux can also operate at zero carbon when using green sources of electricity and can be retrofitted into existing plant systems to improve the efficiency of ageing chemical facilities.

In a recent large-scale test carried out in Japan, it has proven to be four times quicker than other batch reactors operating under the same conditions while using up to 50 per cent less energy than traditional technologies.

Dr Marcus Campbell Bannerman and Dr Panagiotis Kechagiopoulos, from the School of Engineering provided simulation expertise to validate and optimise early designs of the reactor.

Dr Bannerman commented: “We performed simulations of PTSC’s new reactor design and the more traditional existing reactor design to compare, predict, and optimise its performance. In doing so, we found a large increase in heat transfer and mixing performance, as well as some ways to improve performance.

Conventional wisdom is to use traditional designs of reactors, but this new reactor can lead to massively increased productivity as well as cost and energy savings" Dr Marcus Campbell Bannerman

“PTSC combined our results with their own development work through an international team to secure funding for the full-scale trial in Japan, which confirmed that the reactor met the excellent performance predicted in our simulations.

“Conventional wisdom is to use traditional designs of reactors, but this new reactor can lead to massively increased productivity as well as cost and energy savings. Industry should now start integrating it into their existing plants and new designs.”

PTSC Managing Director Andrew C Wills added: “The conceptual design modelling study carried out by the team at the University of Aberdeen allowed us to provide an academic review and analysis that we weren’t able to carry out ourselves.

“These results provided a degree of independence to PTSC’s own assessments, allowing a greater confidence in our radical approach to batch chemical processing from partners who were able to see the numbers behind our vision.

“The results of our large-scale testing have exceeded our expectations and we believe our reactor has the potential to be a major disruptor in the chemical industry.

“We’d like to thank everyone who has supported us and invested in our vision, including the team at the University of Aberdeen. We’re looking forward to taking the PI QFlux batch reactor to market and delivering real change in the chemicals industry by driving efficiencies and cutting carbon emissions.”

*The batch reactor was developed as part of an international effort involving specialists from across Scotland, the UK and overseas. The University of Aberdeen and Glasgow Caledonian University, along with numerous manufacturing partners across Scotland and the UK helped develop the prototype. Kobelco Eco-Solutions Co Ltd of Japan and Scotland headquartered Aggreko worked with PTSC to create the purpose-built test facility in Harima, Japan to test the batch reactor in real world conditions.

PTSC also received a range of support from Scottish Enterprise and Business Gateway to develop and test this revolutionary technology. Scottish Enterprise support included a £42,800 R&D (research and development) grant to assist the company with its prototype development and a further £9,000 grant to help develop its international market strategy.