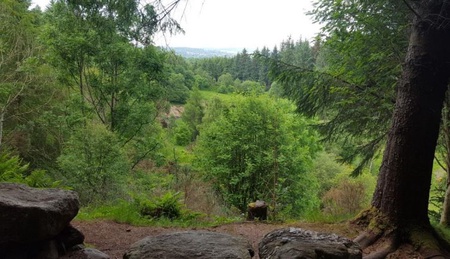 The annual carbon emissions of 80 people could be offset by a community woodland designed for recreation and biodiversity conservation; research carried out in Maryculter, Aberdeenshire, has shown.

A case study of Maryculter Community Woods, a site used by groups like the local scouts, a nursery, and for horse riding, has shown that as well as being used as a public amenity space the trees in the area can also remove substantial amounts of carbon dioxide from the atmosphere, reducing the carbon footprint of the local residents.

Maryculter Woodlands Trust purchased Maryculter Woods, a 66ha site, in 2015 with help from Scottish Land Fund as well as community fundraising. It is a very popular area widely used by the community and visitors alike and is entirely managed by volunteers.

Research from the University of Aberdeen’s School of Biological Sciences carried out a test in Maryculter of the tools easily available online to measure and forecast the carbon stocks of community woodlands, which are likely to increase because of Scottish Government land reforms and tree planting targets to support climate change goals.

Published in Scottish Forestry, the study, carried out by Justin Thomas as part of his MSc in Environment and Forestry Management, shows that the tools available can help managers better understand the future growth of their trees and the trade-offs involved in optimising carbon sequestration.

Justin explains: “The research shows that the resources now available online from the Forestry Commission and the Woodland Carbon Code can be adopted relatively easily by community woodland managers who may not have forestry expertise. The limitations of the models need to be understood but they allow managers to better understand the carbon content of their woods and the carbon trade-offs that may be involved in woodland management decisions.

The research shows that resources now available online from the Forestry Commission and the Woodland Carbon Code can be adopted relatively easily by community woodland managers who may not have forestry expertise." Justin Thomas

“The tools available will allow residents to make these decisions even if they lack access to detailed advice from forestry specialists.”

Models projecting carbon sequestration rates to 2100 suggest that management options designed to meet the conservation and restoration objectives of the Maryculter Woodland Trust, such as thinning, clear felling of mature conifers, suppression of non-native species and promotion of native broadleaf species over conifers, would reduce the carbon mitigation benefit accrued over 80 years.

However, the models provide accessible tools for exploring the trade-offs inherent to management of carbon sequestration and biodiversity conservation.

Interdisciplinary Director for Environment and Biodiversity Professor David Burslem said: “The number of community woodlands is expanding rapidly across Scotland driven by new government policies. These have multiple functions including biodiversity conservation, amenity and recreation; however, our research suggests that they can also remove large amounts of carbon dioxide from the atmosphere, which helps to lessen climate change. For example, our research in Maryculter suggests that tree growth in the community woodlands could offset the direct emissions of more than 80 local residents, although this number will vary depending on how the woodland is managed by the community.”

Ed Thorogood, chairman Maryculter Woodlands Trust added: “We have found Justin’s work to be both timely and insightful. There are indeed many trade-offs to evaluate in the management of community woodlands. The more we can quantify the trade-offs, with associated uncertainty estimates, the better  our decision-making will be.”

This case study illustrates the use of readily available tools for helping to understand the consequences of those decisions for carbon storage and potential carbon sequestration. It shows that a small (<70ha) site stores a considerable amount of carbon in tree biomass, and that, with no changes to management, it has the potential to more than double that quantity by 2100. The implied rate of carbon sequestration over those 79 years would offset the direct carbon dioxide emissions of about 84 Maryculter residents assuming their per capita emissions are similar to the UK average. However, the intention of the Maryculter Woodlands Trust to reduce the proportion of non-native conifers in favour of native birch woodland over the next few decades will reduce these estimates of carbon storage and carbon sequestration rate, reflecting the trade-off between managing for biodiversity conservation and climate mitigation. This trade-off could be partially mitigated by planting more broadleaves that attain a large size and enhance biodiversity, such as oak and beech, although the benefits of these species for carbon storage will take longer to accrue because of their slower growth rate. Ultimately, the decision over how much of the woodland to retain as plantations of Sitka spruce and other conifers and how much to convert to a diverse mix of tree species will reflect the balance between competing demands for biodiversity conservation, carbon sequestration and income generation, in Maryculter as well as other community woodlands.

The authors are grateful to Maryculter Woodlands Trust (Scottish Charitable Incorporated Organisation: SC044224) for its support.