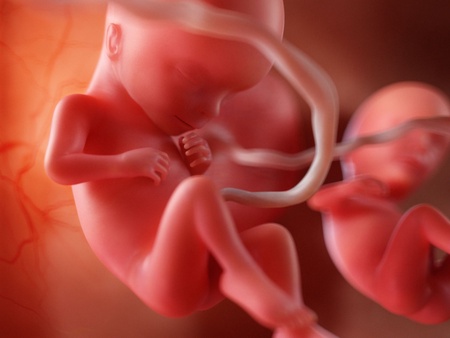 Giving steroids to women pregnant with twins at risk of premature delivery reduces the chance of infant death and respiratory distress syndrome, according to a new review of existing studies by the University of Aberdeen.

Twins and higher multiples of babies are as much as 10 times more likely to be born prematurely compared to single babies.

Being born prematurely carries risks of stillbirth or other harm to the babies.

Steroids are regularly used to reduce the chance of neonatal death, respiratory related death and other complications in babies that are expected to be born prematurely.

However, studies of their use in these cases tend to look at single births expected to be born early and twins and higher multiples of babies as one group.

Following calls to look at the use of antenatal steroids specifically in births involving twins, triplets etc, University of Aberdeen researchers along with colleagues from McGill University, Canada and Monash University Australia have reviewed all relevant studies from across the world from 1974 to 2018. The findings have been published in Obstetrics and Gynecology journal.

The researchers included nonrandomized studies that compared outcomes among twin newborns who had or had not been exposed to antenatal steroids. No restriction was applied to drug type, dosage, or number of doses.

Of the 7,802 records screened by the team, 18 studies (reporting on more than 33,000 newborns) met the team’s inclusion criteria.

The study concluded that the use of steroids resulted in lower numbers of neonatal death and respiratory disease syndrome in twins – findings that are largely in agreement with the 2020 Cochrane meta-analyses of randomized trials in multiples but with more precise estimates due to a much larger sample size.

The researchers are calling for twins to be included in future studies of this type as they are often underrepresented in clinical research.

Dr Sohinee Bhattacharya, from the University of Aberdeen, said: “This is an important review of existing literature as it has enabled us to look specifically at twins and see that they in particular are benefitting from the use of steroids.

“Our results tally with the Cochrane review and given our larger sample size, this should give clinicians further confidence that this is an appropriate treatment that results in improved outcomes for babies.

“Twins and other multiple births are often excluded from research as, due to their relatively rare nature, they are outliers in comparison to many single births. But it is essential that twins and higher numbers are included so that we can ensure that treatments are just as safe for them as it is for single birth babies.”