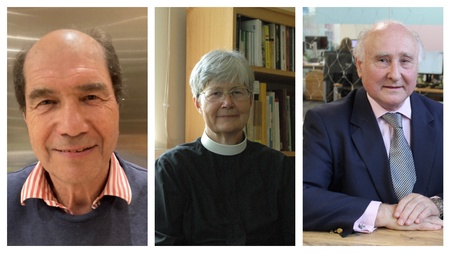 A renowned composer and broadcaster, a leading international figure in health and social care policy, and a distinguished theologian will be honoured by the University of Aberdeen at its annual summer graduations next week (4-8 July)

Professor David Croisdale-Appleby OBE, who will be presented with Doctor of Laws (LLD) on Monday 4 July, has a distinguished record of working to promote social justice, and was awarded an OBE in 2009 in recognition of his work in this area.

He has chaired many national organisations and is currently Chair of The Royal College of Physicians, Dementia UK, BeyondAutism, and the Public Health and the Social Care Advisory Committees at the UK’s National Institute for Health and Care Excellence (NICE).

Professor Croisdale-Appleby has held numerous government advisory roles and visiting and honorary professorships in the fields of health, social care, medical education and social policy, including at the University of Aberdeen. He is also the author of an independent review for the UK Government of social work education in the United Kingdom.

Michael Berkeley (Lord Berkeley of Knighton CBE) is a composer, music broadcaster and peer, who will be presented with a Doctor of Music (DMus) on Thursday 7 July.

Our graduation ceremonies give us the opportunity to celebrate the fantastic achievements of our students, and our honorary degree recipients who have all achieved so much in their respective fields" Professor George Boyne, Principal

Lord Berkeley studied composition, singing and piano at the Royal Academy of Music, and in 1977 he was awarded the Guinness Prize for Composition and appointed Associate Composer to the Scottish Chamber Orchestra.  His work has attracted an international audience and been played by some of the world's finest musicians. Formerly artistic director of the Cheltenham International Festival of Music, he has presented BBC Radio 3's Private Passions programme since 1995.  In 2012, he was made a CBE for services to music in the Queen’s Birthday Honours and has served as a non-party member of the House of Lords since 2013.

Professor Katherine Sonderegger will be awarded Doctor of Divinity (DD) on Friday 8 July. Professor Sonderegger is a distinguished theologian and William Meade Chair in Systematic Theology at Virginia Theological Seminary in the United States. Formerly Professor of Religion at Middlebury College in Vermont, and alumna of Yale Divinity School, she has been an ordained deacon and priest in the Episcopal Church since 2000. She is a member of the American Academy of Religion, the American Theological Society, the Karl Barth Society of America, and the New Haven Theological Discussion Group. She also serves on the Executive Committee of the Anglican Theological Review.

Professor George Boyne, Principal and Vice-Chancellor of the University, commented: “Next week’s graduation ceremonies give us the opportunity to celebrate the fantastic achievements of our students, and our honorary degree recipients who have all achieved so much in their respective fields and who I am delighted to welcome to our global Aberdeen family.

“For our graduating students and their families, this is a proud moment where they can celebrate, reflect, and take pride in all that they have achieved during their time at Aberdeen – made all the more remarkable by the challenges we have faced together as a result of the pandemic.

“It is my sincere wish that our graduates leave their ceremonies feeling inspired and ready to make an impact in the world, building on the many valuable lessons they have learned during their time here.”