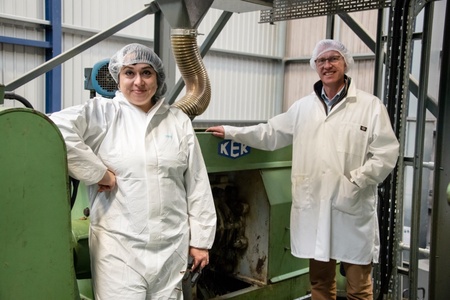 Cold pressed hemp oil has been commercially produced in Scotland for the first time, inspired by research taking place at the University of Aberdeen's Rowett Institute into the crop's nutritional, health and environmental benefits.

Hemp cultivation dates back more than 6000 years and was once widely grown in Scotland. It is currently being used in building materials, as a biofuel, textile fabric, food source and even as an alternative to plastic.

The development comes as a result of research taking place at the Rowett Institute led by Dr Madalina Neacsu and others. Their insights into the benefits of hemp led to Dr Neacsu establishing the partnership that led to last week’s pressing, which includes the involvement of Scottish farmers from the Scottish Hemp Growers Association.

The oil and the by-products from the first cold pressing will now be used to investigate the potential of hemp as a sustainable food crop.

“It is ideally placed to provide dietary protein diversification, as well as to boost daily fibre intake as it is a rich source of protein and dietary fibre, as well as containing healthy fats and micronutrient minerals including magnesium, phosphorus, potassium, calcium and zinc.

“Research at the Rowett Institute focuses on hemp seed as a sustainable and environmentally friendly food crop by exploring hemp as a source of nutrients. We will be looking at the potential of hemp as a functional food ingredient by assessing the metabolism, bioavailability and biological activity of the nutrients and other bioactives. This will inform on its potential to be used as part of nutritional strategies to prevent or support people living with or at risk of non-communicable disorders such as type 2 diabetes and cardiovascular disease.

“Our research has showed how adding hemp seed flour to your diet can help promote satiety and we are seeking to understand how re-establishing the production of hemp in Scotland could offer a more sustainable alternative to importing protein-rich crops like soya bean.”

The work will also focus on giving value to the by-products of hemp oil pressing to deliver a truly zero waste process for hemp oil production. This involves research on the ‘cake’ which is oatcake like in texture that is ground from the seeds and the ‘fudge’ which is a thick substance created during the pressing.

Graeme Warren works at Waterside Farm, one of the eight members of the Scottish Hemp Growers Association that had their hemp seed cold pressed at Norvite in a first for Scotland.

He said: “It has been very encouraging so far to see the interest in re-starting the hemp growing industry in Scotland and the positive benefits that the crop can bring, both environmentally and in the health benefits of the end products.

“The group of farmers are all very grateful to the support for the fledgling industry which we have seen from third parties including SAOS, Norvite and particularly the Rowett Institute. Hopefully, the launch of products made from our Scottish grown hemp seed and its pressed oil will give further credibility to the industry and be noted both by the public and by decision makers at Westminster and Holyrood.”

Alison Easson, founder of Hemp It Up, said: “Norvite have played an instrumental role in helping our Scottish group of hemp growers get this far.  The cold pressing and filtering of our precious first hemp crop has been a learning experience for us all, now it’s time to get it into bottles and test the Scottish market, raising public awareness of the huge health and environmental benefits from growing and eating hemp seed oil.”

David McClelland, Technical Director for Norvite Animal Nutrition Company, had invited seven of the seed growers and representatives from the Rowett Institute to see the first Scottish produced hemp oil be pressed.

He commented: “Norvite has been cold pressing locally grown rapeseed since 2015. Last year we crushed linseed for the first time, so hempseed is the third Scottish oil seed crop we have pressed. We are delighted to be involved with the group and excited about the production of such a novel and innovative crop.”