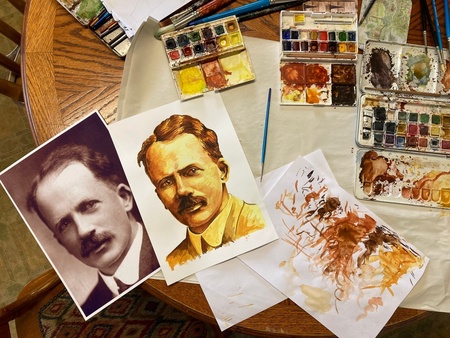 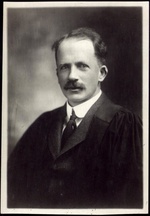 A University of Aberdeen graduate is co-leading a project to pay tribute to a fellow alumnus and former Regius professor of Physiology whose team made a breakthrough which has saved the lives of millions of people with Type 1 diabetes.

Kimberlie Hamilton graduated from the University in 2019 but was unaware that when she crossed the stage to receive her MSc in Cultural and Creative Communication she was being capped by the same institution from which JJR Macleod had earned his medical degree 121 years earlier.

Macleod led a team which made the breakthrough in discovering insulin therapy for the treatment of Type 1 diabetes. Prior to the discovery in Toronto in the early 1920s, the condition was an inevitable and short death sentence.

Despite being jointly awarded the Nobel Prize for his work in 1923, Macleod’s name was largely airbrushed from the discovery during his lifetime as a result of acrimony between the researchers who contributed to the breakthrough.

Kimberlie only became aware of the JJR Macleod story after visiting the city’s Allenvale Cemetery with her partner, John Otto, who has lived with Type 1 diabetes since he was a child.

The pair are now leading a project which will see a permanent memorial to JJR Macleod installed in Aberdeen’s Duthie park, just a short distance from his final resting place.

Kimberlie explains: “Despite having diabetes for all these years, John was unaware that Macleod was from Aberdeen until he heard that the Nobel Prize-winner was buried in Allenvale Cemetery. He made a special point of finding Macleod's grave, which is quite modest, and it was there and then that the idea to create a more fitting memorial originated.”

Following the launch of a fundraising campaign, the JJR Macleod Memorial Statue Society plans to install a bronze statue of Macleod seated on an iconic Royal Parks bench, a folded newspaper at his side with a headline referring to the 1922 discovery of insulin. It will rest on a specially designed terrace of Aberdeen granite featuring pavers inscribed with sponsors’ names.

Nearby, mounted bronze plaques will present Macleod’s name, key dates, his integral role in the discovery of insulin and a replica of his 1923 Nobel Prize for Medicine medal inset in stone.

They hope that the statue will be unveiled next August, when John is also due to receive his 50-year medal from Diabetes UK.

Kimberlie hopes that such a prominent memorial in the home of his alma mater – and the place he returned to in 1928 and worked as a Regius Professor of Physiology until his death in 1935 – will help more people connect to his story and legacy.

“We are launching the memorial statue project in 2022 as it is 100 years after the discovery of useable insulin”, Kimberlie added. While many of the Centenary celebrations happened last year, even these are based on accounts which failed to acknowledge Macleod’s vital role in the discovery. It was not until January 1922 that insulin was sufficiently purified to successfully treat a human patient for the first time.

“I was immediately intrigued by Macleod's story as I have a soft spot for the unsung heroes of history. In fact, I wrote my first nonfiction children's book while a graduate student at Aberdeen University, Rebel Cats!, which is all about unsung heroes of history who happen to be feline. I have since written four other books highlighting animals and people who have been overlooked or misrepresented for one reason or another, so Macleod's under-the-radar legacy was right up my street.

“John and I both agreed that with this being the 100th year anniversary of the discovery of useable insulin, there was no better time to raise awareness about Macleod's incredible contributions to medicine. That's how the JJR Macleod Memorial Statue Society came into being.”

Kimberlie and John – whose daughter Jaclyn Otto is an Aberdeen Politics & International Relations MA graduate while youngest son Joseph Otto is currently pursuing an Economics degree – credit being part of the University of Aberdeen ‘family’ as further inspiration for the initiative.

“My master's course at Aberdeen University was in Cultural and Creative Communication, which I believe is an ideal foundation for the Macleod Memorial Statue project. History is all about storytelling and this is such a unique and creative opportunity to tell Macleod's story the way it deserves to be told and to bring greater attention to the City of Aberdeen and Aberdeen University. I sincerely hope this memorial and the media attention it brings and the cultural education potential it provides will more broadly raise awareness of diabetes and Scotland's remarkable track record of innovation, exploration and discovery.

“The fact that this inspiring Nobel Laureate was educated in Aberdeen and chose to return here to teach at his alma mater is something that everyone in this city and region should know about and be proud of. We are very excited to watch this statue as it evolves from dream to reality and plan to share every step of its creative journey on the Macleod Memorial Statue website and social media.”

To learn more about the JJR Memorial project visit https://www.jjrmacleodmemorial.co.uk/

Further links to the project