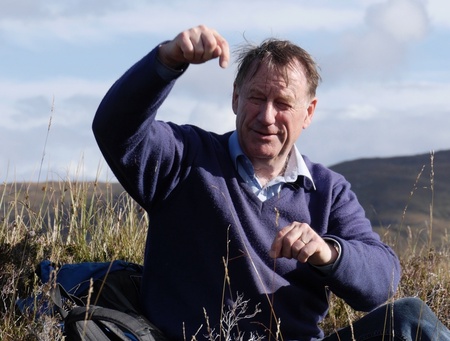 Emeritus professor Tim Ingold, who worked at the University from 1999 until his retirement in 2018,been awarded a CBE in the Queen's birthday honours.

Professor Ingold has received this honour for services to anthropology, which he defines as ‘philosophy with the people in’.

Tim Ingold has carried out ethnographic fieldwork among Saami and Finnish people in Lapland, and has written on comparative questions of environment, technology and social organisation in the circumpolar North, as well as on the role of animals in human society, on issues in human ecology, and on evolutionary theory in anthropology, biology and history. He has gone on to explore the links between environmental perception and skilled practice, with a view to replacing traditional models of genetic and cultural transmission with a relational approach focusing on the growth of bodily skills of perception and action within social and environmental contexts of development. These ideas are presented in his book The Perception of the Environment (2000), a collection of 23 essays written over the previous decade on the themes of livelihood, dwelling and skill.

In his subsequent research, Tim Ingold went on to develop three lines of inquiry that emerged from his earlier work, concerning the dynamics of pedestrian movement, the creativity of practice, and the linearity of writing. These all came together in a project funded by the UK Economic and Social Research Council (2005-08), entitled ‘Explorations in the comparative anthropology of the line’, resulting in his book Lines (2007), along with three edited collections: Creativity and Cultural Improvisation (with Elizabeth Hallam, 2007), Ways of Walking (with Jo Lee Vergunst, 2008) and Redrawing Anthropology (2011), and in his further collected essays, Being Alive (2011).

Ingold has gone on to write and teach on issues on the interface between anthropology, archaeology, art and architecture, leading to his books, Making (2013) and The Life of Lines (2015). He has directed the project ‘Knowing From the Inside: Anthropology, Art, Architecture and Design’ (2013-18), with funding from the European Research Council. Ingold’s books, Anthropology and/as Education and Anthropology: Why it Matters, were published in 2018, and Correspondences, in 2020. His latest volume of collected essays, Imagining for Real, appeared in 2022.

Tim Ingold is a Fellow of both the British Academy and the Royal Society of Edinburgh. Following his retirement from the University in 2018, he continues to research and write as an independent scholar.

Professor Ingold said: "I am absolutely delighted to receive this honour, which I would like to see as a recognition not just of my own contribution to the study of anthropology, but of that of all my colleagues and students in our wonderful Department of Anthropology here at the University of Aberdeen."