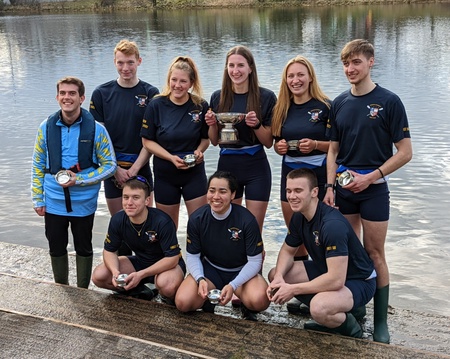 The University of Aberdeen has won this year's Aberdeen Boat Race which took place on the River Dee today (Saturday, April 2).

Both universities adopted the theme ‘show your true colours’ for the 2022 race, with supporters donning their team colours – blue and yellow for the University of Aberdeen, and purple and black for RGU – turning the banks of the Dee into a colourful spectacle.

The race, which has been running since 1996, is described as the north-east of Scotland’s answer to the annual Oxford-Cambridge Boat Race and takes place over a 3.5km stretch of the Dee between the Bridge of Dee and the Aberdeen Boat Club.

Both crews train year-round for the race. Each of the 18 rowers take just under 5500 strokes during the race, testing their physical and mental endurance to the limit.

Speaking after the race, Aberdeen University Boat Club (AUBC) Team President Emily Carruthers said: “The race went well, with a strong start from both clubs, with the conditions being perfect for racing.

"It was nice to have the full scale event back and having supporters cheering us on in the last leg of the race, it makes all the difference for our athletes! Looking forward to next year where we will go head to head again and try retain our victory for another year!”

Bob Newton, Boat Race Secretary and Event Organiser, said: “It was great to see spectators back to the banks of the Dee for this year’s Aberdeen Boat Race, especially given this wasn’t possible last year.

“From the crews to the spectators and everyone else involved, today’s event was one to remember and underlined the importance of the boat race as a sporting institution here in the north-east.

“My thanks go to both universities and other partners for their ongoing support, and warm congratulations to the University of Aberdeen as this year’s winners, and to RGU for being such worthy opponents.”