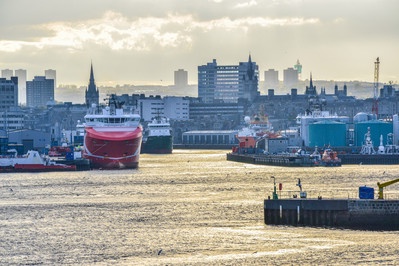 Delivering a just transition to net zero in Europe's energy capital will come under the spotlight later this month when the University of Aberdeen brings academia, industry leaders, policy and third sector organisations together to debate the key issues.

Hosted by the University’s Centre for Energy Transition, the one-day interactive workshop on March 23 will examine the work being undertaken to reduce emissions from exploration and production activities, assist with social changes of a just transition and explore the opportunities to push forward new technologies.

Launched in May 2021, the Centre for Energy Transition is a dynamic interdisciplinary research centre bringing together experts working on delivering a low-carbon transition in the energy sector.

One of the themes of the Centre – oil and gas in transition – brings together academics tackling the challenge of a responsible and just transition in the context of low-carbon exploration and production, energy security and evaluating industry performance against net-zero targets in the UK, especially in Scotland.

Supported by the Centre for Energy Law and the Just Transition Lab, the workshop seeks to facilitate an open dialogue with stakeholders around achieving a just transition in the North-east, while highlighting the world-class research being undertaken by the University.

Panellists from a wide range of organisations will take part in the discussions, with keynote addresses from Aberdeenshire East MSP Gillian Martin and John Underhill, Director of the Centre for Energy Transition.

Daria Shapovalova, co-director of the Centre for Energy Law and organiser of the event, said: “At the University of Aberdeen, academics across disciplines are working on the aspects of transition to net zero in North East of Scotland. We are committed to fulfilling our Aberdeen 2040 vision and tackling interdisciplinary challenges in an inclusive way. Our ambition with this workshop is to bring diverse voices from across the spectrum together for constructive debate and discussion on the route forward.”

The energy transition is one of the key societal challenges of our time, with implications on a global, national and local level." John Underhill, Director of the Centre for Energy Transition

The morning session will focus on the technological solutions to decarbonising E&P and decommissioning and will include speakers Bethan Vasey from Shell, Rebecca Allison of the Net Zero Technology Centre, and Richard Neilson of the National Decommissioning Centre; as well as academics Matthew Brettle and Abbe Brown from the University’s Schools of Geosciences and Law.

The second session will look at the impact of communities and the workforce in the North-east and feature insights from Aberdeen’s Lord Provost Barney Crockett, Ryan Morrison and Scott Herrett of Friends of the Earth Scotland, Jake Molloy of the RMT Union; and Jenny Macdonald of Skills Development Scotland. Tavis Potts and John Bone of the University’s Just Transitions Lab, and Keith Bender of the Business School, will also take part.

The closing panel, during which participants will hear from Jo Bagguley of the Oil & Gas Authority, Mark Lappin of Deltic Energy and Luca Corradi of the Net Zero Technology, will explore the industry’s route to net zero. This session includes input from Alex Kemp, Rachel Brackenridge and John Paterson of the Schools of Business, Geosciences and Law, respectively.

John Underhill, Director of the Centre for Energy Transition, said: “The energy transition is one of the key societal challenges of our time, with implications on a global, national and local level. Whilst there is a recognition of the need to decarbonise and reduce emissions, it is also important not to go at a pace that endangers security of energy supply and brings fuel poverty. Consequently, the emphasis on the move away from fossil fuel dependence is that it is a transition and not a cliff edge and there remains a role for oil and gas in the interim.

"Given Aberdeen’s place as the UK’s oil capital, a lot of jobs and services depend on ensuring there is a focus on people as we make the transition. Creating meaningful partnerships between industry, academia, policymakers, government, and the city are key to delivering the transition.  The Centre for Energy Transition is committed to the research and training to make informed choices and facilitate the re- and up-skilling necessary to meet the challenge ahead.”

Oil and Gas in Transition: Delivering Just Transition to Net Zero in the North East on March 23 is a hybrid event taking place both online and at the University’s Old Aberdeen campus. Information on the full programme and registration details can be found here.