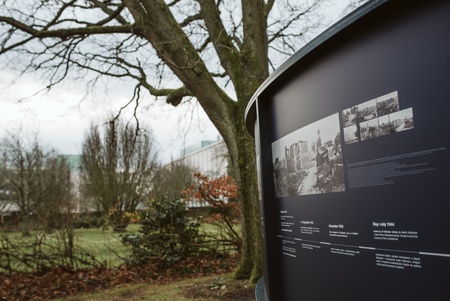 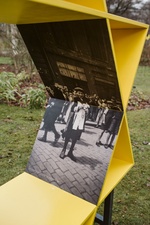 An outdoor exhibition dedicated to a little-known story of Jewish artists whose talent was exploited by the Nazis is now open at the University of Aberdeen's Cruickshank Botanic Garden.

Titled ‘I open my eyes, there's no one’, the exhibition tells the story of copyists from the Białystok ghetto who were forced to recreate work by the great masters of European painting.

The copy shop was set up in 1941 by Oskar Steffen, a German officer and industrialist and around 20 Jewish artists worked around the clock and in painstaking detail, for no pay or increased rations.

Only one member of this ‘cheap labour force’ survived the war, Izaak Celnikier who entered Białystok with his family aged 16 and was used to stretch and prime canvases and take care of the supply of paints and tools in the studio.

Celnikier went on to become a successful artist and, after surviving time in the concentration camps of Stutthof, Auschwitz, Birkenau, Flossenburg and Dachau, the main theme of his work was the cruelty of the Second World War.

His memoirs provide the narrative for the exhibition – the result of a collaboration between the University of Aberdeen and the Polish Association Aberdeen, a Polish diaspora organization established in 1993, whose ambition is to create and strengthen a positive image of Poland and Poles, promote democracy, human rights, including the rights of ethnic minorities.

‘I open my eyes, there's no one’ is the first of a series of projects known as the ‘History Zone’ created by the Polish Aberdeen Association to disseminate the cultural heritage of Poland.

It has been authored and curated by Marta Surowiec and draws on Celnikier’s unpublished manuscripts and his post-war works, which were made available by the artist's family for the project.

She said:” The knowledge about the artists from the Białystok Ghetto is very fragmentary, therefore the exhibition was preceded by months-long research through the collections of museums, archives and private collections in Poland, Germany, Israel, the United States and France. Many of the photographs and reproductions made available during the exhibition have not been published before.

“The exhibition will present the artist's works from the collection called La mémoire gravée, ‘Engraved in memory’. Many of the presented artworks relate directly to the events in the Białystok ghetto.

“It will be possible to experience the events of the Białystok ghetto through the artist's words and art, gaining the true perspective of a participant in the events.

Professor Peter Edwards, Vice-Principal Regional Engagement and Regional Recovery at the University of Aberdeen said: “This is an important exhibition telling a little-known story of the copyists from the Białystok ghetto and we are honoured to be able to host it in the Cruickshank Botanic Garden.

“The manuscripts and the series of graphic works by Izaak Celnikier presenting the events in the ghetto are a moving reminder of the Holocaust and the exhibition provides a space for reflection and an opportunity to engage in learning about this dark period of our history.”

“The garden setting as a place of renewal, growth and of the changing seasons provides an appropriate backdrop for this harrowing story of human suffering and hope.

“Placed on free-standing displays, the exhibition will create a kind of open museum, allowing people to take in the skilfully created works and the stories behind them.”

Mateusz Łagoda, Chairman of the Polish Association Aberdeen, says this first step in the ‘History Zone’ project will support mutual learning and greater understanding of Polish culture and heritage in Scotland.

“In each of the ongoing projects we focus on issues related to the history and culture of Scotland,” he said.

“In this way, we will gradually create a series referring to the historical legacy of both countries. Our ambition is to create a long-term project which, using modern language and communication channels, will promote the knowledge of Poland's historical identity regarding its heritage and traditions.”

The exhibition project was made possible thanks to the support of Big Lottery Awards For All, Aberdeen City Council, the Consulate General of the Republic of Poland in Edinburgh and the Polish Cultural Institute in London.

It has been arranged in zones, each with a different layout but unified by iconography,  making up a full picture of the history of the Białystok Ghetto copyists' workshop.

‘I open my eyes, there's no one’ will run until February 28 2022 and includes QR codes that redirect visitors to the work of copyists on a specially designed website