Ceremony to complete the return of Benin Bronze
27 October 2021 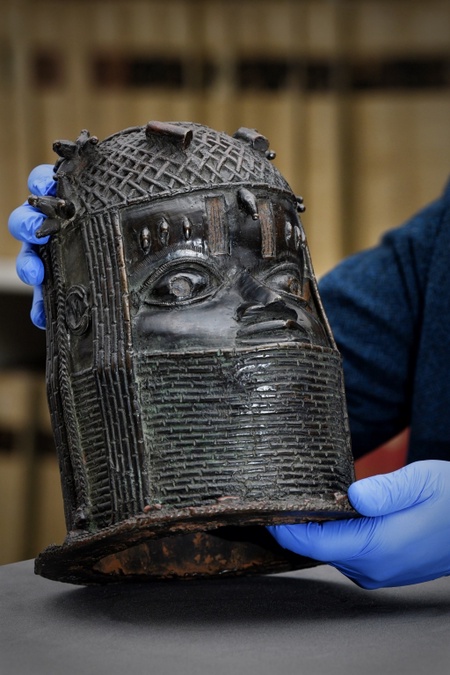 The University of Aberdeen will complete the return of a Benin Bronze at a handover ceremony on Thursday.

They will be accompanied by Prince Isa Bayero, a Prince of the Kano Emirates; His Excellency, Suleiman Sani, Deputy High Commissioner to Nigeria in UK; and Mrs Edith Ekunke, Retired Director of the National Museum, Lagos.

The University became the first institution to agree to the full repatriation from a museum of a Benin Bronze in March and will hand back the Bronze this week, as will Jesus College Cambridge.

The sculpture, which depicts the head of an Oba (king), is one of thousands of religious and cultural artefacts looted by British forces in 1897 during the destruction of Benin City in present-day Nigeria by a British military expedition.

It was purchased by the University of Aberdeen at an auction in 1957. A recent review of collections included research into its provenance confirming that it was one of the so-called ‘bronzes’, acquired in immoral circumstances during the Benin Punitive Expedition in which the royal palace of the Oba was burned and looted.

As a result, in 2020 the University instigated a conversation through Professor Bankole Sodipo, Professor of Law in Babcock University, Nigeria, with the National Commission for Museums and Monuments of Nigeria, the Edo State Government and the Royal Court of the Oba, regarding its return.

A formal request for repatriation by the Nigerian Federal Government and supported by the other parties, was then proposed and in March 2021 this was unanimously approved by the University Court following discussion by an expert panel, which included representatives of the University, the Director of the Hunterian Museum in the University of Glasgow and Professor Sodipo representing the Nigerian partners.

we thank the University of Aberdeen for this noble act of returning our bronze work. We hope that other institutions worldwide will see the injustice when they insist on holding on to items which in fact should be a reminder to them of the great injustice that was inflicted on a people so far away and so long ago" His Royal Majesty, Oba of Benin, Omo N'Oba N'Edo Uku Akpolokpolo, Ewuare II

The process of a legal transfer then began with the University working to support the timescales identified by the Nigerian partners for its physical return.

His Royal Majesty, Oba of Benin, Omo N'Oba N'Edo Uku Akpolokpolo, Ewuare II, said: “Much has been said about the significance of heritage art and, in spite of the occasional attempts in some quarters to downplay their cultural and religious relevance, these works are often imbued with the spirit of the people from whom they were taken.

“Regardless of the resistance in some quarters, the return of stolen art is the right thing to do. Some say that they acquired their own collections. This is like saying, well, I know this item was originally stolen but because I bought it somewhere, then I’m okay. That notion is completely wrong and unfortunate.

“In any event, we thank the University of Aberdeen for this noble act of returning our bronze work. We hope that other institutions worldwide will see the injustice when they insist on holding on to items which in fact should be a reminder to them of the great injustice that was inflicted on a people so far away and so long ago“

“The University commenced this move without being instigated. This is unprecedented. On its volition, the University felt it ought to return to Nigeria an important cultural object it obtained some decades ago through what can pass in the United Kingdom as legal acquisition. I must appreciate Professor Bankole Sodipo who linked up with Lawyer Babatunde Adebiyi of the Commission to ensure that an avenue for discussion was created.

“The synergy was an added impetus to the initiative of the University of Aberdeen. Today, we are witnessing the success story. The Commission intends to cement its relationship with the University of Aberdeen and also work with the University in fashioning mutual agreements with other universities and institutions in the region regarding Nigerian artefacts in their holdings. We earnestly expect without any doubt that other persons and institutions will reach out to us for talks on the way forward concerning Nigerian artefacts in their possession. The Aberdeen return should inspire all to a future of friendly returns.”

The Minister of Information and Culture of Nigeria, Alhaji Lai Mohammed, said: "Nigeria warmly welcomes the return of the Benin Bronze Head by the University of Aberdeen and once again calls on all individuals, organizations and countries in possession of Nigerian artefacts to voluntarily return them to where they belong – Nigeria."

Professor George Boyne, Principal and Vice-Chancellor of the University of Aberdeen, said: “Over the last 40 years the Benin Bronzes have become important symbols of injustice.

“It would not have been right to have retained an item of such great cultural significance that was acquired in such reprehensible circumstances.

“The University took a proactive approach to identify the appropriate people to discuss what to do and we are extremely grateful for the collective approach taken by the partners in Nigeria, which has facilitated this return.

“We are delighted to welcome our guests representing the Federal Republic of Nigeria , the Kingdom of Benin, and the National Commission for Museums and Monuments and commend their spirit of co-operation in making this possible.”

The partners have committed to the safe-keeping of the Bronze ‘in such a manner and in true essence of its sovereignty’, until it can be put on public display at the Oba’s palace or other agreed place.