50,000 dollar project aims to preserve indigenous 'voices' in danger of being lost for future genera
13 October 2021 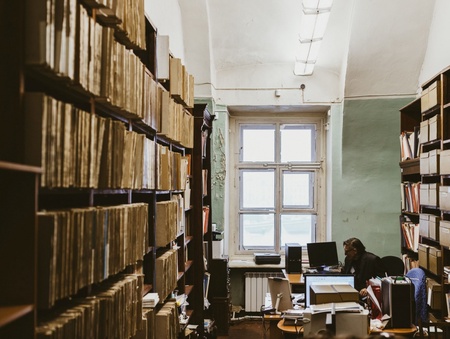 An Aberdeen academic has been awarded 50,000 US dollars to digitise an endangered archive containing the voices, stories and songs of indigenous people of the North captured over six decades.

Anthropologist Professor David Anderson will co-lead work to preserve and share the rare recordings, which are currently held on cassette tape and are in danger of turning to dust.

The two-year project, funded by the Modern Endangered Archives Program at the UCLA Library with funding from Arcadia, will use specialist sound technicians to extract the audio recordings from tapes which are currently held at Pushkin House in St Petersburg, Russia.

Professor Anderson said: “Cassette tapes like these are the most endangered medium we have. Within 20 years they are all going to be dust but what they contain is important material which can never be replaced.

“The archive contains recordings taken from the 1920s through to the 1980s made by Soviet ethnographers and linguists but it is now extremely fragile. Having the stories, songs, language and history of indigenous groups from the Siberian region spoken in their own voices is hugely important for future generations of local people and scholars.

“Industrialisation and other external interferences have in some cases near extinguished the local and Indigenous languages and traditions of these groups so losing this material would be devastating.”

But extracting the contents of the tapes requires specialist skills and as part of the project a laboratory will be established in St Petersburg to ensure the delicate task can continue after the end of the initial project.

“For the most badly damaged tapes, extracting what they contain requires them to be baked in an oven but after that, you only get one chance at playing them before the recordings are lost,” Professor Anderson added.

“We will be working with Russian sound technicians on this process which then requires them to be disassembled, rewound and played at different speeds to remove the interference caused by damage to the tapes, which stick together causing squealing sounds.

“It is difficult to believe that this medium, which I myself used as a young researcher, has now become so badly endangered.

“Russian cassette tapes from the Soviet era are particularly fragile and here the process of degradation has been speeded up by water leakages in the building which have increased the humidity.”

Researchers will then share the digital resources created with Indigenous communities in Siberia and the North through relationships built up through other projects and work in this area, for which the University of Aberdeen has established an international reputation.

The Arcadia fund, which will support the project, is a charitable fund of Lisbet Rausing and Peter Baldwin

Co-leader Dr Dmitry Arzyutov, an honorary research fellow at the University of Aberdeen added: “This is the largest collection of Siberian indigenous voice recordings in the world. It may rival the Smithsonian collection both in terms of its design and scope but remains little known.

“We hope this project will help to shine a light on this important collection, which is in great risk of disappearing and with it this intimate portrait of lifestyles.

“Our work and analysis can help to reconstruct the transnational history of Arctic indigenous voice recordings and most importantly, make them accessible again to the indigenous communities to which they belong.”