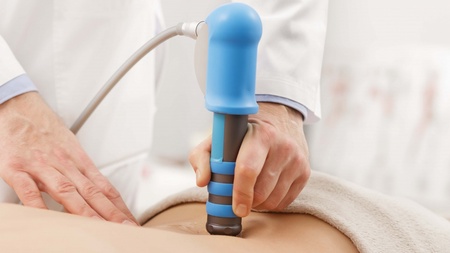 Shockwave therapy - used as a last resort to treat wounds that do not heal with conventional treatments - could have other, previously unknown benefits, University of Aberdeen researchers have found.

More recent studies also revealed that using low intensity waves, the technology might be suitable to assist the treatment of several conditions, including soft tissue wounds.

The new findings, published in the International Journal of Molecular Sciences, means that shockwave therapy might be suitable to assist the treatment, for example, of certain types of cancer.

The effectiveness of shockwaves was previously thought to be due to its ability to stimulate the production of more blood vessels to drive the healing process.

Now researchers from the University of Aberdeen and NHS Grampian’s Department of Vascular Surgery have found that the treatment also kick-starts the properties of important white blood cells, so they develop functions that make wounds heal such as clearing away debris and infection.

The team discovered in more detail than ever before how shockwave therapy changes the function of white blood cells in wounds that had been ongoing and non-healing for over 3 months.

The results suggest there may be wider uses for the therapy, and it also allows us to be more targeted in those who receive it." Professor Heather Wilson

They have also applied the same clinical intensity shockwaves to white blood cells in the laboratory to see in greater detail how their properties are affected.

The findings suggest other disorders where white blood cells are dysregulated, such as certain cancers or autoimmune and inflammatory conditions, could also benefit from shockwave therapy.

In the clinic, shockwave therapy is only effective in healing for in a subgroup of patients, and this new research may help explain why this is the case – ensuring therapy is only used with patients who could benefit.

Lead researcher Heather Wilson, Professor of Immunology at the University of Aberdeen, said: “This new study shows the benefit of shockwave therapy could be wider than previously thought, though conversely, it may also explain why the therapy is not effective on all patients.

“More research is required of course, but the results of studying white blood cells in the laboratory while they are exposed to shockwaves suggests there may be wider uses for the therapy, and it also allows us to be more targeted in those who receive it.”

The study was funded by NHS Grampian Endowments scheme.