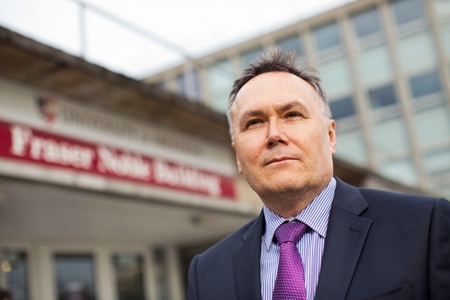 The Head of the University of Aberdeen's School of Engineering has been appointed to lead a group that exists to help boost engineering research in Scotland.

Professor Igor Guz has been appointed as Director of the Northern Research Partnership in Engineering (NRPe), a collaboration between the University of Aberdeen, Dundee University, and RGU.

The NRPe is one of three regional partnerships created by the Scottish Funding Council as part of the Scottish Research Partnership in Engineering (SRPe), which exists to help universities collaborate at a strategic level and share expertise and resources.

In addition to his appointment as Director of the NRPe, Professor Guz also joins the SRPe Board, which is led by Sir Jim McDonald, Principal of the University of Strathclyde.

Commenting on his appointment, Professor Guz said: “I am delighted to have been appointed to the role of NRPe Director, and to join the SRPe Board.

It is an honour to have been given this role, and I look forward to working in collaboration with others as we seek research-driven solutions that support economic recovery" Professor Igor Guz, Head of School of Engineering

“The SRPe adopts a Scotland-wide strategy to drive research impact, giving universities a means through which to share knowledge and expertise across academic disciplines to tackle the most complex of technological and societal challenges.

“It is an honour to have been given this role, and I look forward to working in collaboration with others as we seek research-driven solutions that support economic recovery and build on Scotland’s reputation for research excellence and international competitiveness.”

Professor George Boyne, University Principal, added: “Professor Guz is a leading voice in engineering research in Scotland, and his appointment to this role is testament to his standing within the research community.

“Through our Aberdeen 2040 strategy the University is working to assist in economic recovery, harnessing our research expertise across multiple academic disciplines to enable growth and respond to the impact of the pandemic.

“This includes having our researchers involved in roles where they have the ability to influence the discussion in areas that will assist in economic recovery, such as engineering which remains so vitally important to our industries especially here in the north-east.  I congratulate Professor Guz on his appointment, and wish him all the very best in his new role.”