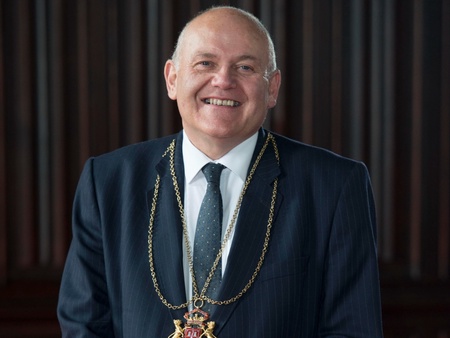 The Lord Provost of Aberdeen, Barney Crockett, will feature as a guest on a special episode of the University of Aberdeen's Café Connect podcast series, to discuss his research into the Kindertransports which brought Jewish children to Britain in the 1930s, some of whom came to Aberdeen.

Hosted by Dr Chris Croly, Public Engagement with Research Manager at the University, Café Connect provides an opportunity to talk to researchers about their work and how it impacts our everyday lives. This month’s episode is in partnership with the University’s Hay of Seaton Memorial Committee which honours distinguished historian, Malcolm Hay of Seaton, who devoted himself to highlighting the history of anti-Semitism and the Jewish people.

The Kindertransport (Children’s Transport) rescue scheme ran between November 1938 and September 1939 and helped approximately 10,000 children, the majority of whom were Jewish, who were sent from their homes and families in Europe to Great Britain.

In the episode, the Lord Provost discusses his particular interest in Jewish history, which was inspired by one of his predecessors, Lord Provost Thomas Mitchell who was in post from 1938 to 1947.

Many organisations in the city were involved with helping the children and it's been particularly interesting to discover how our region played a role in these important moments in history." The Lord Provost of Aberdeen, Barney Crockett

Mr Crockett said: “I have always had an interest in the Holocaust and Jewish history but what really struck me was that almost immediately after the Kristallnacht, a night of violent anti-Jewish demonstrations in Europe on 9 November 1938, Lord Provost Thomas Mitchell arranged a meeting in Aberdeen’s Music Hall to try and help Jewish children and their families. It was one of the first things he chose to do in post and it really inspired my ongoing research.

“We don’t know how many children came to Aberdeen but it has been fascinating finding out more about those we have been able to trace so far, such as Ernestine Young who was adopted by Sir Thomas and Lady Jaffrey, one of Aberdeen’s wealthiest couples. Many organisations in the city were involved with helping the children and it’s been particularly interesting to discover how our region played a role in these important moments in history.”

Dr Chris Croly said: “It was an honour to host the Lord Provost on this special episode as we engaged on this fascinating topic, which really highlights how different aspects of history weave together and demonstrates what a rich and vibrant history that Aberdeen has.”