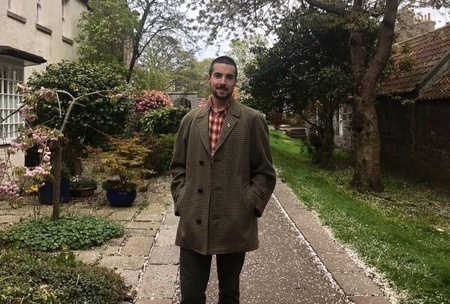 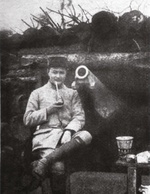 The work of a fourth-year history student highlighting the role played by Latin American soldiers in the First World War has been included in a new book.

Tomas Pizarro-Escuti’s research is included in the second volume of a 500-page book called Glimpses of War produced by the British Modern Military History Society to raise funds to support veterans with sight loss.

The book features a wide range of articles looking at conflicts over the last 150 years ranging from the Boer War to the Falklands War and more recent operations in Afghanistan.

Tomas said he was delighted his work was selected to appear in print and that he has been able to highlight an often-overlooked contribution to the First World War.

“The historiography on the participation of Latin America in the First World War has been scarce in both the European and Ibero-American academia despite the significant number of Latin Americans who volunteered in the War,” he added.

“Thousands of young Latin Americans embarked between 1914 and 1918 to join either the Allies or the Central Powers and fight alongside British, French, Italian and even Ottoman soldiers. In fact, Argentina alone sent around 40,000 combatants.

“Why did they leave the comfort of their homes and cross the ocean for a War that apparently was not theirs?

“At a personal level, I was fascinated by the opportunity of researching something which has hardly been studied before and I am also pleased to be able to shine new light on the contribution they made.”

Tomas’s interest in the subject was piqued by his third-year history course ‘World War I: International Perspectives’, delivered by Professor Thomas Weber and Professor Anthony Heywood.

“I very much enjoyed the course, not only because the content and the classes were great, but because we were encouraged to do our own research in areas of our interest,” Tomas said.

“The article is an extension of an essay I wrote for the course and it has been fascinating to delve deeper into this aspect of the First Word War.

“I was also looking forward to writing my history dissertation about a similar topic, the experience of the British Latin American Volunteers in the Great War. Unfortunately, due to Covid-19, I was unable to continue my research since most archives and libraries have been closed.

“The history department has been very supportive and once I finish my degree, I hope to continue studying this subject.”

He said: “Tomas’ work is really quite extraordinary. His essay already had the sophistication of a fully minted academic. And he managed to shed light on an important topic about so little is known: Latin America’s involvement in the First World War. Tomas will have a great future.”

Tomas said: “Blind Veterans UK provides rehabilitation, training, practical advice and emotional support to visually impaired veterans. Many of them have been severely impacted by pandemic, their situation is truly heart breaking because with sight loss social isolation is even more painful to bear.

“I am hopeful that people will buy the book, not only because of its historical value but because it contributes to a good cause.  I think the fact that the military-history magazine Britain at War has chosen Glimpses of War as their book of the month is promising.”