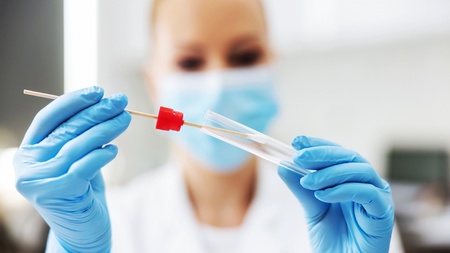 A new Covid-19 antibody test superior to those currently available has been developed by researchers at the University of Aberdeen in collaboration with Vertebrate Antibodies Ltd and NHS Grampian.

Covid-19 antibody, or serology, tests are designed to tell if a person has previously had the virus.

Accurate antibody tests will become increasingly important in the management of the pandemic and vaccination programmes as a tool to monitor how many people have had the virus and how it is spreading.

They can also help determine how effective the vaccine is and to gauge population immunity as well as assessing new strains of the virus and their impact on vaccine performance.

However, existing antibody tests can be limited in the information they provide, and some are not suited to rapid mass deployment as they can be inaccurate and also detect other coronaviruses (for example, the common cold).

In response to the Chief Scientists Office Rapid Research in Covid-19 programme funding, the team has developed a new test that has shown high levels of accuracy in smaller scale trials. The next step is to start a trial on a larger cohort.

If approved, the test could be used for mass screening of NHS staff and key workers as well as identifying high-risk patients or carriers of the virus.

It would also provide data on the prevalence of Covid-19 emerging mutant strains and herd immunity.

Our prototype test has been designed in line with the gold standard requirements for such tests and in our smaller scale trial has proven more accurate while giving more useful information than existing tests. " Professor Mirela Delibegovic

Importantly, the test could be used to evaluate the efficiency of the vaccination programme and how long the vaccine provides protection, as well as being able to differentiate between protection resulting from vaccination or recovery from natural infection.

Using artificial intelligence (EpitopePredikt), the team identified specific elements, or ‘hot spots’ of the virus that trigger the body’s immune defence. The team were then able to invent a new way to include these viral elements as they would appear in the body to improve the test’s performance.

The prototype test has been developed in accordance to the gold standard of antibody tests and is highly accurate, affordable, suitable for mass rollout and does not require specialised laboratories.

Professor Mirela Delibegovic, who led the team, said: “Antibody tests are essential for monitoring how widespread Covid-19 is, to give an idea of any potential herd immunity and to judge how effective the vaccines are.

“Existing tests have been known to give a relatively high rate of false positives and negatives probably due to cross-reactivity with other coronaviruses, and so it is clear that a better test was required.

“Our prototype test has been designed in line with the gold standard requirements for such tests and in our smaller scale trial has proven more accurate while giving more useful information than existing tests. The next step is to attempt a wider-scale trial to test its suitability for use on a much bigger scale.

“This project has been completed in an incredibly short timescale thanks to the funding from the CSO and of course the fantastic collaboration between the University of Aberdeen, Vertebrate Antibodies Ltd and NHS-Grampian.”